Hidilyn Diaz, Elreen Ando may clash over one Paris 2024 slot 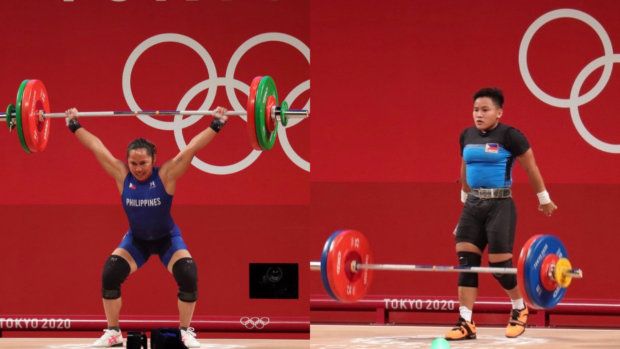 With just 10 weight classes to be disputed in Paris, Diaz and Ando could wind up fighting for the lone Philippine slot in the women’s 59-kilogram—unless they both drastically reduce or add weight.

Diaz captured the nation’s first Olympic gold in the 55-kg class, while the 23-year-old Ando suited up in the heavier 64-kg division in Tokyo.

READ MORE: Ando has the makings of another Hidilyn – Puentevella

“I prefer that they compete in different categories so we can have more lifters in Paris,’’ said Samahang Weightlifting ng Pilipinas president Monico Puentevella. “I don’t really look forward to the two of them fighting it out because they can adjust their body weights by themselves.’’

Going up the weighing scale isn’t new to Diaz, who secured a silver medal in the 53-kg division during the 2016 Rio de Janeiro Games before pushing it to 55 kgs where she nailed the ultimate prize in Tokyo 2021.

As for the Cebuana Ando, sliding five kilograms down will likewise pose a challenge, but can prove beneficial since she won’t sacrifice much of her strength and ability in lifting heavier metal plates.

“It will be natural for Elreen,’’ said Puentevella. “Hidi can go down [to a lower weight class], but it will all depend on the decision of coach Julius (Naranjo).’’

The local weightlifting association will field both Diaz and Ando in the coming Southeast Asian (SEA) Games in Vietnam on May 12-25 where their usual fighting weight will be featured as well as in the Asian Games in Hangzhou, China, in September.

“It’s really up to them. But first we have to finish the SEA Games and then go to the Asian Games. After that, we will sit down because the two of them will have to decide,’’ said Puentevella.

According to Puentevella, the national weightlifting squad is capable of qualifying three to four lifters to Paris, including 18-year-old Asian juniors and seniors champion Vanessa Sarno and Kristel Macrohon.

“Both of them (Diaz and Ando) are qualified, both of them have chances to win, but only one can represent the country for each category [in the Olympics],’’ added Puentevella.