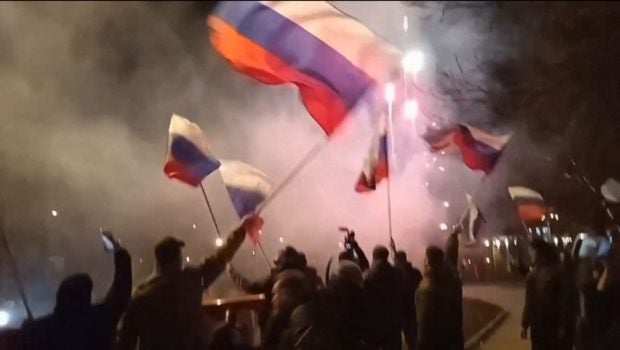 PARIS — President Vladimir Putin’s announcement that Russia is recognizing two eastern Ukrainian breakaway regions and ordering troops to the area has left analysts guessing over whether the Kremlin is preparing an even deeper incursion.

Commentators are divided over Russia’s future strategy for Ukraine, with some believing a large-scale invasion is still on the cards while others expect Putin to stick with the new status quo, at least for now.

In an incandescent address that the French presidency said was marked by “paranoia”, Putin doubted Ukraine’s right to statehood, mocked the legitimacy of the government and even accused Kyiv of seeking to arm itself with a nuclear bomb.

In the historic speech, he did not go beyond recognition of the two regions. But he issued a chilling warning that the Ukrainian government would bear “full responsibility” for any ensuing bloodletting.

AFP takes a look at the possible future scenarios Russia could be mulling for Ukraine:

The UK and US have repeatedly over the last weeks cited intelligence as indicating that Russia is planning a full invasion of Ukraine, up to a bid to take the capital Kyiv.

The US has removed its diplomats from the entire country and UK Prime Minister Boris Johnson said that with his speech Putin was “establishing the pretext for a full-scale offensive.”

Russia has over the last weeks massed some 150,000 troops close to the border with Ukraine, a major effort that some analysts doubt Putin made merely to recognize two regions already controlled by pro-Moscow separatists.

But even if Moscow decided an operation to take Kyiv was too risky politically and militarily, it could still opt for a potentially still bloody confrontation with a more limited incursion.

Russia could use its forces to seek to oust the Ukrainian government from these areas, and it remains a critical question within what geographic boundaries Putin has recognized the DNR and LNR.

The Kremlin could be tempted to push forces north towards the city of Mariupol and then seek to connect with the Ukrainian Black Sea peninsula of Crimea, annexed by Moscow in 2014 but only connected to Russia via a bridge.

“My best guess is that Putin will stop at the current line of control and try to hold things there, in order to avoid escalation,” said Sam Greene, professor in Russian politics at King’s College London.

“But he’ll leave open the possibility of pushing further, in order to keep the pressure on.”

Russian state-controlled media have already celebrated the recognition of the two regions as a victory for Moscow while Putin has in the last weeks succeeded in driving his concerns for security to the top of the West’s agenda.

His over one hour long speech felt to some like the concluding point of the current escalation, and Russia will still be hit by new sanctions and face the suspension of the Nord Stream gas pipeline to Germany.

While Putin ordered Russia’s military to act as peacekeepers in the two regions, Deputy Foreign Minister Andrei Rudenko said there was no need to send troops to eastern Ukraine for now.

EU foreign policy chief Josep Borrell acknowledged that what had happened so far was not a “fully-fledged” invasion.

Russia’s messaging on within what geographical limits it is recognizing the two regions has been mixed, with pro-government lawmakers giving different opinions over whether it should be restricted to just the existing DNR and LNR.

Dmitry Trenin, the director of the Moscow Carnegie Center, wrote in the immediate aftermath of Putin’s speech: “Russia-Ukraine: no major war. Instead, stabilization of frontline for now.”

But he accepted Moscow was “crossing an important line” by declaring the regions independent while at the same time making a de-facto withdrawal of recognition from the Kyiv government.