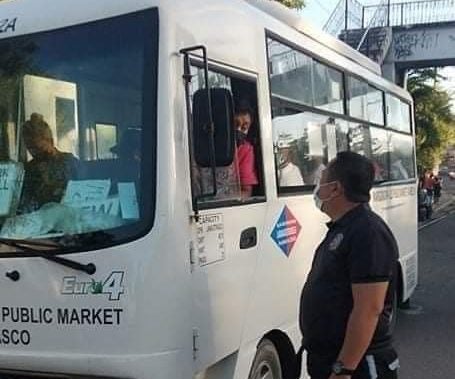 A personnel of TEAM speaks to a driver of a modern PUJ during a checkpoint to check on overloading PUJs. | photo from Bantay TEAM

MANDAUE CITY, Cebu—At least 17 citation tickets for overloading were issued by the Traffic Enforcement Agency of Mandaue (TEAM) to PUJ drivers during a checkpoint conducted in the city’s boundaries on Wednesday, March 2, 2022.

Cebu, including Mandaue City, has allowed full seating capacity for public utility vehicles (PUV) starting March 1, but the use of extension seats and allowing standing passengers are still prohibited.

Jumao-as said most of the violators of overloading were drivers of the traditional PUJs.

He said they are already compiling the drivers’ traffic violations. It will be sent to the operators so that they would be aware and could talk to their drivers not to overload their vehicles.

Jumao-as said even though they deploy some of their personnel at the Comelec Gun Ban checkpoint to accompany the police, they will still be conducting random checkpoints to inspect PUJs for overloading.