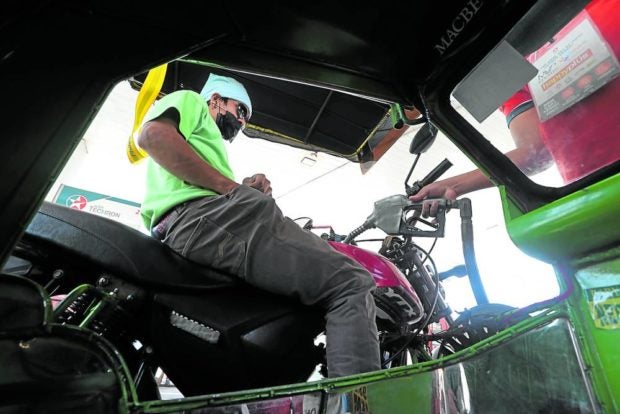 LAST CENTAVO | A tricycle driver searches his pocket for bills and coins to pay for fuel at a gasoline station on E. Rodriguez Avenue in Quezon City on Monday. Pump prices are increasing today by as much as P5.85 per liter for diesel and P3.60 per liter for gasoline. (NIÑO JESUS ORBETA / PHILIPPINE DAILY INQUIRER)

MANILA, Philippines — Despite the continued increase in fuel prices, the government is not inclined to grant the petition of public utility drivers for a P1 hike in transport fares.

Undersecretary Rose Edillon of the National Economic and Development Authority (Neda) on Monday told a hearing of the House of Representatives that raising transport fares could lead to a “bigger inflationary risk” once it snowballs into wage hike petitions.

She said Neda would propose instead a balance of “reasonable” fare adjustment plus subsidies from the national government during today’s (Tuesday) hearing by the Land Transportation Franchising and Regulatory Board on the fare hike petition of transport groups.

On Monday, oil companies announced the biggest increase in pump prices of petroleum products so far this year: P5.85 for a liter of diesel, P4.10 for kerosene and P3.60 for gasoline. These will take effect today.

The volatile movement of the oil market has already fanned fears of an energy crisis, which could affect not only the prices of local petroleum products but also that of electricity, food and transport.

The recent spikes in oil prices have been due to the impact of Russia’s invasion of neighboring Ukraine on an already tight global crude supply.

Among the measures with an immediate effect of lowering fuel prices is the suspension of the tax on fuel.

Lawmakers on Monday again appealed to President Rodrigo Duterte to call a special session of Congress to pass the measure suspending the excise on oil and to declare a state of economic emergency.

Congress is on break and will resume session on May 23, or after the national elections.

House tax chief and Albay Rep. Joey Salceda said Duterte should call a special session if crude oil price would not go below $100 a barrel by March 15.

“It is his moral obligation to the people to provide relief because that means almost 70 days of suffering already without relief, any form of relief from government,” Salceda told reporters after the hearing of the House ad hoc committee on fuel crisis.

He also urged Duterte to declare a state of economic emergency arising from the fuel crisis to allow him to use the government’s calamity fund.

He said that a state of economic emergency would also let local governments use their calamity funds to provide relief to tricycle drivers, farmers, and fisherfolk.

Rep. Sharon Garin, chair of the House economic affairs committee, also backed suggestions for the President to call a special session of Congress to tackle the suspension of the excise on oil and petroleum products.

“The incessant oil price hike for the past 10 weeks is a result of the ongoing geopolitical tensions that we may be helpless to prevent. But we are not incapable of finding solutions to how it is affecting our country,” Garin said.

During Monday’s House hearing, Neda Director Reynaldo Cancio said domestic oil price increases would shed about 0.3-0.9 percentage point from gross domestic product as a result of elevated consumer prices and possible snowballing demand for salary increases, which Salceda said would be equivalent to about P330 billion.

Energy Undersecretary Gerardo Erguiza also told lawmakers that there was no problem with the supply of fuel products coming into the Philippines, noting that the problem was in the prices.

“We have more than 40 days worth of supply in our inventory,” he said.

Legislators pressed Neda officials for their policy recommendations to ease the burden inflicted by the continued fuel price increases, but the Cabinet’s Economic Development Cluster met on Monday afternoon and decided to first present their proposals to Duterte in a subsequent meeting.

Cancio said further reopening the economy to generate more productive output would help shield the country against the negative impact of expensive oil.

“I know that the Department of Energy has assured us that the conflict between Russia and Ukraine will have no direct impact on our nation’s supply,” Garin said, but she pointed out that the meeting was held to find “a feasible solution to help cushion the impact of this crisis.”

“The rising prices of domestic petroleum will have a direct effect on our economic stability, just when we are starting to relax our (quarantine) restrictions,” Garin said.

She said Congress must immediately address a possible economic crisis due to rising prices of oil products, noting that “any day now, it will start to reflect on the prices of food and other necessities.”

Joe Zaldarriaga, vice president and head of corporate communications at Manila Electric Co. (Meralco), said “there is pressure for power costs to mirror pump fuel prices” since the peso depreciation and movements in global fuel prices affect the generation charge portion of the electricity bill of consumers.

Air travel costs and logistics providers are also preparing to increase rates to consumers due to rising fuel prices.

Airline customers may feel the impact through higher fuel surcharges as the industry seeks to mitigate costs while recovering from the COVID-19 pandemic.

Carmelo Arcilla, executive director of the Civil Aeronautics Board, told the Inquirer that he expected ticket prices to go up as airlines seek to offset surging operating expenses.

“The way we see it now, the cost of oil is skyrocketing so there is no way to look at it but for the fares to increase, considering that fuel cost is the biggest component of the fare structure,” Arcilla said on Monday.

Garin also warned that commuters returning for on-site work could be burdened by possible fare increases.

“Another significant and most painful impact of this incessant increase is what we call the ‘sticky price’ phenomenon—retailers do not usually lower their prices even when oil prices eventually go down,” she said.

“We are all consumers and all of us will be affected. We cannot afford to just sit and watch events take their due course. We must act now,” she added. —WITH A REPORT FROM MIGUEL R. CAMUS

Read Next
After bird flu cases confirmed, Cebu bans all poultry products and byproducts from Luzon