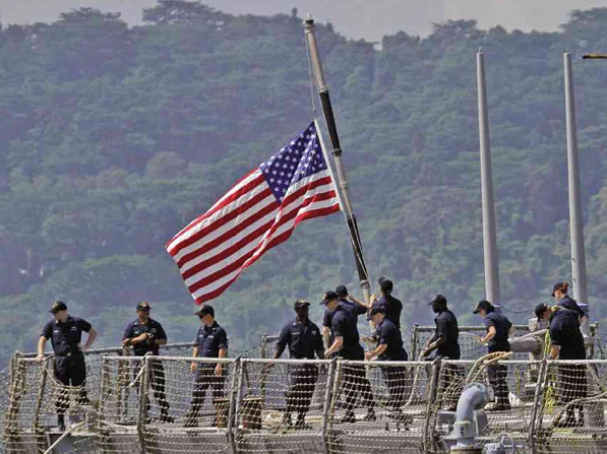 (FILE) American sailors hoist the US flag on the guided missile destroyer USS Fitzgerald as it docks in Subic Bay. The ship is taking part in Philippine-US naval exercises. (RAFFY LERMA)

MANILA, Philippines — President Rodrigo Duterte has assured that the Philippines is ready to offer the country’s facilities for use by the United States should the crisis between Russia and Ukraine “spill over” to Asia, Manila’s top diplomat to Washington said Thursday.

“If push comes to shove, the Philippines will be ready to be part of the effort, especially if this Ukrainian crisis spills over to the Asian region,” Philippine Ambassador to the United States Jose Romualdez said in an online round table discussion with reporters.

“He (Duterte) offered that the Philippines will be ready to open its doors, especially to our ally, the United States, in using our facilities, any facilities that they may need,” Romualdez said.

This assurance came from the President when Romualdez was in Manila last week and met with him. The ambassador said he informed Duterte about an invitation for Southeast Asian leaders to come to Washington for a special summit.

Romualdez said Duterte was “half and half” about attending the event but committed to helping out the United States if needed.

According to him, part of Duterte’s assurance is that the Philippines will honor its Mutual Defense Treaty (MDT) with the United States if the situation warrants it. The MDT calls for both nations to come to each other’s defense in case of an armed attack.

When asked which facilities the Philippines will be offering to the US, Romualdez mentioned Subic Bay, a former US military base until 1992.

“He said that he is allowing the use of facilities, which I assume would be the use of Clark for instance, for some of the aircraft that the United States may need,” Romualdez said.

He also said facilities in Clark, Pampanga may also be opened for the use of the United States if an “emergency situation” breaks out.

“And perhaps Subic. We have a repair facility there that is going to be used not only by the United States but by other countries, Japan, Australia and other countries. It’s a commercial business. Hanjin is now ready to be opened again for use by many of the ships, both private and military ships or Navy ships that may want to use it for repair or for other activities,” Romualdez said.

“I’m pretty sure that the President met this to be an emergency to situation where—let’s pray that it doesn’t happen—but if this spreads out into our part, the Asian region, for some reason or another, the President obviously sees the need for us to make a choice and our choices, obviously, since we have an MDT with the United States, we have this special relationship, our military alliance,” he added.

Meanwhile, Romualdez said ambassadors from Southeast Asia will be meeting with the White House’s national security council on Friday to discuss, among others, the sanctions Washington will be imposing on Moscow amid its invasion of Ukraine.

Read Next
More than 170,000 COVID vaccines wasted in Central Visayas