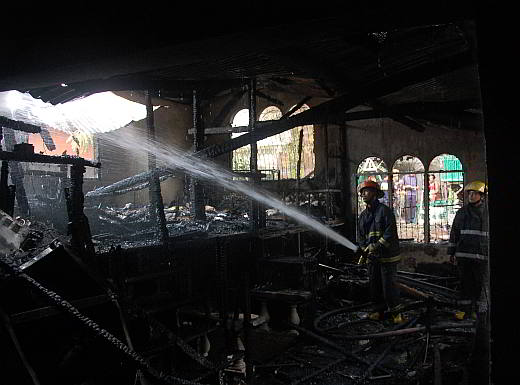 An elderly woman  died after she was trapped in her burning house  in barangay Kasambagan, Cebu City past 10 a.m. yesterday.

The charred remains of 100-year-old Juanita Arcaya   were  found in the rubble of  her room on the second floor of the two-story house.
Barangay records showed that she was born in Jan. 15, 1914.

The fire started in her room but the exact cause of the blaze is still being investigated.

Cebu City Fire Marshall Rogelio Bongabong said they are looking into the possibility that a lighted cigarette which Arcaya failed to put out started the fire.

Sylvia Sim, the victim’s granddaughter, said they tried to rescue the old woman but it was too late.

“We tried to open the door but the fire was already big and the smoke was thick,” Sim said in Cebuano.  Damage was pegged at P100,000.
The Cebu City government took special interest in the case because city residents who live up to the age of 100 are entitled to receive P100,000 as assistance.  This would be on top of a P10,000 burial assistance to the family.

“I want the DSWS to look into the centenarian who died and likewise for the City Council to  check if she is qualified,” said Cebu City Mayor Michael Rama.

The victim’s relatives were gathering her papers to support her centenarian status.

“We issued a certification stating that she was born in 1914 after her children asked for it,” said barangay secretary Catherine Arco, whose house is beside the burned residence. She said most of Arcaya’s personal papers were destroyed during the war.

Read Next
Mayol is Globe Reporter of the Year