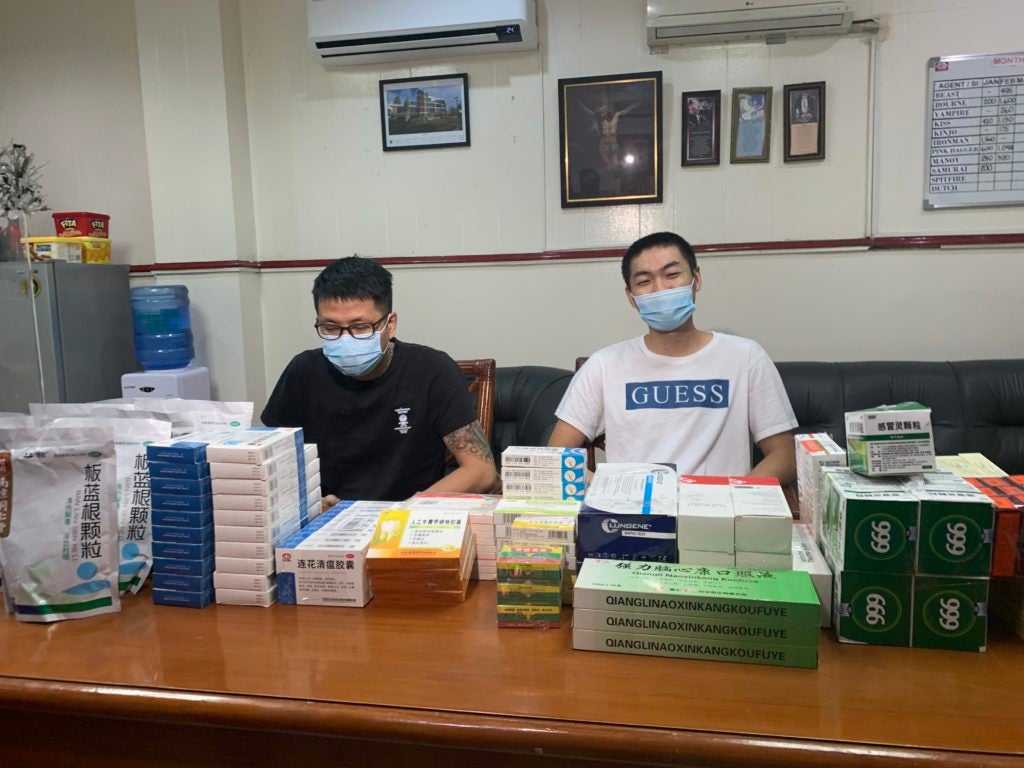 The two arrested Chinese nationals and the counterfeit medicines they were allegedly selling.

Lawyer Renan Oliva, director of the National Bureau of Investigation in Central Visayas (NBI-7), said they served the search warrants against the two last March 18, 2022, after they received reports of their alleged involvement in the illegal activity.

Oliva identified the accused as Shi Wenpai the business owner and manager of a convenience store located in A.S Fortuna Street in Barangay Bakilid, Mandaue City, and Wu Xiao, store manager of the other convenient store located near Wenpai’s establishment.

In their further investigations, Oliva said they found out that both convenience stores do not have business permits.

“The medicines that they were dispensing were amoxicillin capsules, Lianhua Quingwen capsules, allowed to be solved here in the country with English texts. Kana sila, Chinese characters,” he further said.

Accordingly, the confiscated products were worth approximately half a million.

“ We were able to conduct test sales which showed that they were selling Amoxicillin capsules as P220 each, Linhua capsules for P250, Arbidol Hydrochloride for P500, Wantong Muscle stickers for P300, and test kits for 1259. All these items are not registered in the FDA,” Oliva added.

Olive further said that the two establishments were operating for about one year already.

He added that they will continue to track how these two individuals were able to transport the items since they were able to show their passports.

He added that they have already coordinated with the Bureau of Immigration to check their status.

Oliva said that this operation is crucial as this is a public health issue. He appeals to the public to not patronize these counterfeit medicines as these would surely endanger their health.

The two suspects are currently detained at the holding facility of the NBI-7.

Oliva said that the court has set a P100,000 bail for their temporary liberty. If proven guilty, the two could face up to six years in prison before they will be deported to China.   /rcg

Read Next
Azkals compete in FAS Tri-Nations Series in Singapore