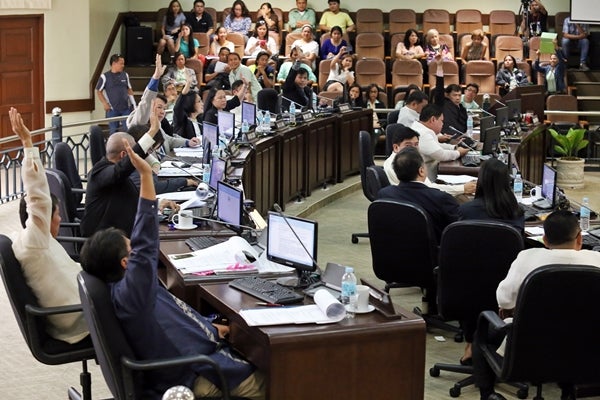 The nine-member BO-PK blocked a proposal to kick out Councilor Margot Osmeña from the budget committee and take over the laws committee headed by Sisinio Andales. (CDN PHOTO/JUNJIE MENDOZA)

When push came to shove, the Bando Osmeña-Pundok Kauswagan (BO-PK) still had the numbers yesterday to stay in control of the Cebu City Council.

In a tension-filled session, members voted to quash a bid by allies of Mayor Michael Rama to wrest control of two powerful standing committees.

The nine-member BO-PK blocked a proposal to kick out Councilor Margot Osmeña from the budget committee and take over the laws committee headed by Sisinio Andales. Eight votes of Rama allies were not enough to let them take charge.

Not only did BO-PK retain control of the 21 committees, they ousted three former allies as chairmen of their committees.

Then BO-PK gave the chairmanships of the hospital, tourism and trade committees to Team Rama.

“It’s okay. I will respect the decision of the majority,” said Carillo.

“ What is important is that I continue to function as a city councilor.”

Mayor Rama said the three ousted councilors will be given “executive assignments”.

“They will be involved in their areas of concern. Even if they don’t have the legislative functions, they will now be actively involved on the executive side,” he said.

The mayor said Carillo will be in the Department of Social Welfare Services (DSWS) and the Cebu City Disaster Risk Reduction and Management Council (CDRRMC) while Richard Osmeña will be given a role in the Police Coordinating and Advisory Council (PCAC).

Wenceslao will be named the mayor’s representative in the Local Finance Committee.

He declared vacant all positions and chairmanships of the standing committees then called for an election to fill the vacancies based on Article 2 Section 1 of the City Council House Rules.

He said a reorganization was necessary for smooth working relations between the executive and legislative departments.

“There is a need for all of us to get our act together and face the problems of the city head on,” he said.

He said the council has to “act as one” and “co-exist with the executive department in solving our problems without necessarily abandoning our independence as an institution.”

“We should stop bickering and heed the people’s wish to action,” Zafra said during his speech.

In reaction, BO-PK Councilor Andales said that while he supports a reorganization, the House rule cited by Zafra applies only to elected officials like the majority floor leader and not to committee chairmen.

A recess was called, and when the session resumed councilors continued to argue over whether the House Rules were being correctly understood.

Vice Mayor Edgardo Labella banged the gavel to adjourn after a motion was quickly made by Team Rama Councilor Nendell Abella.

This triggered heated protest from BO-PK councilors who said the move was done to abort discussion.

As Vice Mayor Labella stepped down from the podium to head for the exit, an exasperated Andales told the vice mayor “to please behave”.

“The motion for adjournment needs a majority vote. That’s a basic rule of procedures. You are so unreasonable. I know you planned this,” Andales said in frustration.

“You are being unfair Mr. Chairman,” Councilor Eugenio Gabuya said.

“What kind of a presiding officer are you?” Andales chimed in in a loud voice.

Councilor Alvin Arcilla then asked presiding officer pro tempore Nestor Archival to take the podium and call for a resumption of the session.

It was the second time Team Rama councilors cut short a regular session since their last attempt at a reorganization last Oct. 1 didn’t succeed.

Arcilla said the City Council had a backlog of 181 communications, resolutions and ordinances to deal with that piled up from the last two session weeks.

“Ngano mahadlok man sila,” Andales said. (Why are they afraid?)

Councilor Margot Osmeña said both camps had agreed over lunch on Tuesday to resolve the planned reorganization during yesterday’s regular session and “accept whatever will be the decision of the council.”

“We all met in good faith,” she said.

The proposal strips Margot Osmeña of the budget committee and leaves her without a post. The committee would have gone to her vice chairman, Wenceslao.

The laws committee of Andale would have gone to Carillo. Alvin Dizon’s housing committee would be given to Abella.Cabarrubias was the only BO-PK councilor to be given the infrastructure and public services committee.

In the end, B0-PK outvoted opponents nine to eight, “killing” the proposal.

Then Gabuya took the floor to deliver a privilege speech presenting BO-PK’s version of a revamp.

Cuenco, the only Team Rama ally heading a committe, kept his chairmanship of the tourism committee.

“I hope we can now all go back to work because it’s over,” Labella said after the session.

Wenceslao said he would still be an“effective” councilor.

Sought for comment, Mayor Rama said, “That’s normal. Things like that can happen, that’s what democracy is all about.”

“Those who stood for us, then that’s ours. Who stood for them, that is theirs,” Rama said.

He said it was a “victory” to see five Team Rama councilors team boosted to eight. But the mayor couldn’t hide his surprise to see Roberto Cabarrubias voting with the BO-PK, who had expressed interest in supporting Team Rama before the mayor flew to Portugal last week.

The mayor said he cannot understand why Cabarrubias changed his mind but if he did, “it’s his loss.”

“Actually, I’m happy that his real color came out. I don’t go for people who cannot stand for their convction.”