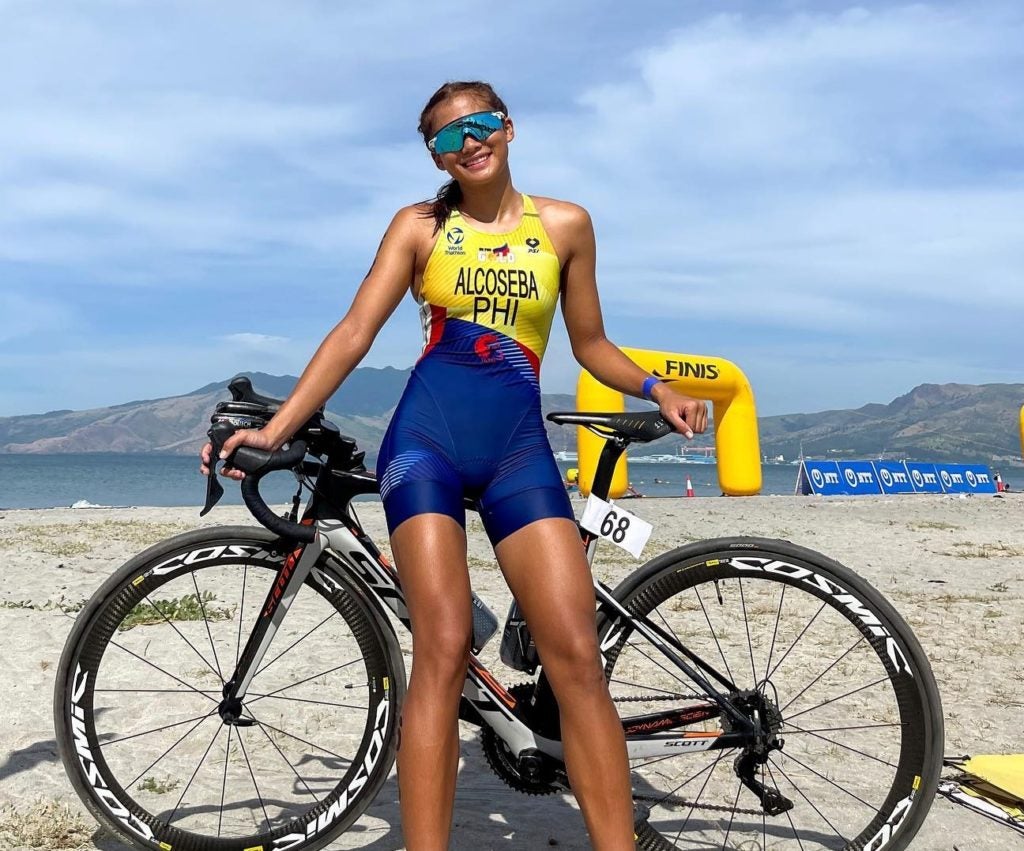 A lot has happened in the past two years for the former varsity swimmer turned triathlete.

In such a short time, Alcoseba was able to smoothly transition from a promising varsity swimmer to a top-level triathlete, all in the middle of the pandemic.

Alcoseba, a varsity swimmer of the Dela Salle University Green Archers in Manila decided to level up a bit by venturing into the more demanding sport of triathlon in 2020 under the tutelage of national triathlon Cebuano coach Roland Remolino.

“Looking back to where I started, I never thought that I could compete in the SEA Games given the short amount of time,” said Alcoseba.

“It does feel very great to be able to represent the country in such a prestigious event and to be able to compete with the best athletes from other countries as well.”

During the height of the COVID-19 pandemic, she decided to join Remolino and other young triathletes from the Talisay Luigi Triathlon Group (TLTG)-Go For Gold, to keep her in shape while waiting for the borders to open and return to Manila to resume her collegiate athletic career as a swimmer at DLSU.

At that time, Alcoseba has no inkling that her simple long rides and grueling runs would punch her a ticket to the biennial regional games.

The dusky triathlete started showing her great cycling potential when she ruled the 100-kilometer women’s division of the Cross Cebu 600, a long-distance cycling competition.

It was wild to imagine that a swimmer like Alcoseba excelled in a totally different sport like cycling, but amazingly she pulled off the stunning feat.

After that cycling competition, Alcoseba joined and won numerous duathlon and triathlon races in 2021.

But it was not until she ruled the stacked women’s elite category of the National Age Group Triathlon (NAGT) in Subic Bay, Zambales last February that the Cebuana burst into national sports prominence.

Her victory in the recent Subic International Triathlon (SUBIT) validated her assumption as the emerging queen of the Philippine triathlon and earned her a precious slot in the 31st SEA Games just two years after she started honing her skills in the multi-discipline sport.

Now that she’s already in Vietnam, Alcoseba admitted feeling nervous about the race tomorrow, May 14, 2022. She will be joined by SEA Games’ multiple gold medalist Kim Mangrobang and fellow first-timer Lauren Plaza.

“I do feel a bit nervous since it is my first SEA Games and it has always been a goal of mine to be able to compete in this event,” added Alcoseba.

Aside from the pandemic, Alcoseba said her studies and her training were her biggest hurdles prior to the SEA Games.

“Aside from training, I have been very busy with school work and I must admit that it is a challenge to balance both,” added Alcoseba.

Andrew Kim has a piece of advice for his teammate and fellow Cebuano triathlete.

“The only advice that I can give to her is maybe don’t overthink everything and don’t forget to enjoy the race because we are doing this not just for ourselves or for our country but also because we love this kind of stuff,” said Remolino, the 2019 SEA Games triathlon silver medalist.

Coach Roland Remolino said he is very confident that both his son Andrew Kim and Alcoseba will make good accounts of themselves in tomorrow’s race.

“Nag expect ko na both of them will get a medal,” said Remolino who trained both triathletes in Cebu under TLTG-Go For Gold.

The elder Remolino also has a piece of advice for Alcoseba.