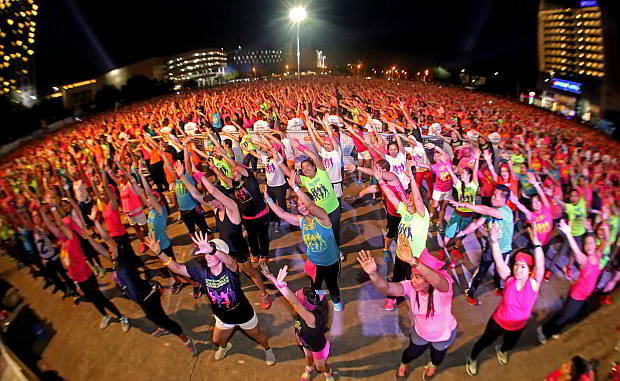 She was one of last night’s 8,232 participants who made Cebu beat India in the Guinness  World Record for “Biggest Zumba Dance.” India only had 6,671 participants.

Cebu’s success came only six days after the failed Zumba record attempt of Quezon City residents whose efforts amid heavy rains and thunderstorms were rejected for “non-compliance” with technical guidelines. Quezon City’s  attempt was part of its diamond jubilee celebration, and officials vowed they will try again soon.

The Zumba dance was only one of two world records achieved yesterday by Cebu, which also succeeded in attaining the Guinness  World Record for “Biggest Archery Class.”

Cebu failed, though, in yesterday’s attempt to break the world record on biggest human pink ribbon formation, having been 237 participants short. 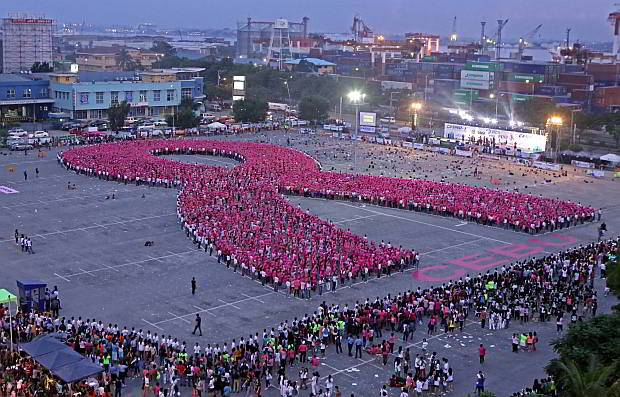 As befits its theme for breast cancer awareness, pink was the dominant color in the human ribbon. (CDN PHOTO/ LITO TECSON)

Praven Patel, “adjudicator” from the Guinness World Record, said that Cebu only had 6,611 participants while India had 6, 847 participants.

When Zumba enthusiast Beltran heard about the world record attempt for human pink ribbon and biggest Zumba dance,  she and her friends decided to register a month ahead.

Beltran used to struggle with weight and blood pressure condition and Zumba helped her improve her health.

“Aside from promoting the advocacy, I also decided to join for health purposes,” she told Cebu Daily News.

She first joined the Zumba dance craze four months ago by downloading zumba dance videos in the internet and following the dance steps at home.

Dancing often to her favorite, “Wiggle” by Jason Derulo, she lost seven kilos in a few months.

Another Zumba enthusiast, an 80-year-old American businessman who has lived in Cebu for 35 years, also joined yesterday’s event at the SM City Cebu parking lot.

Phillip Clover was convinced by his girlfriend, Narlene Tan, to join.

“My girlfriend is also supporting breast cancer awareness. I am also convinced that proceeds here will be donated,” Clover said.

Although his regular exercise is walking, jogging, and swimming, he joins his girlfriend in many Zumba events. 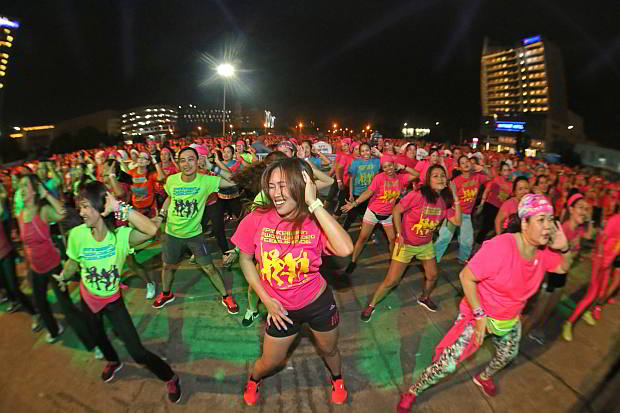 “It’s not also weird if most of the participants here are women. I can still see men but we are here for a cause,” Clover smiled.

Tan, who learned of the event through the media said, “I hope we could also help through this advocacy. It’s very rare for me to join Zumba and we are here for the cause.”

The more than 8,000 participants followed a 30-minute basic Zumba with 60 instructors who were on a  stage put up at the SM City Cebu parking lot.

Before the start of the Zumba dance event, participants got into an outline of a ribbon symbolizing the breast cancer awareness month and stayed in it for five minutes for an aerial shot.

Although they did not break the world record on the biggest human pink ribbon, Patel said he appreciated all the efforts done by the Cebuanos and the organizers.

“Everything was fantastic. The steps, the color, everything was amazing. What happened to the pink ribbon formation was that there was a shorter number,” Patel said.

The  activities yesterday were part of the observance of Breast Cancer Awareness Month in October.  Participants wore pink T-shirts, pink bandannas and rubber shoes for both events.

The historic event was spearheaded by CebuZIN (Zumba Instructors Network) and Rotary Club of Cebu Fuente for their beneficiaries World Vision and ICANSERVE.

Read Next
Quarrel of two cities