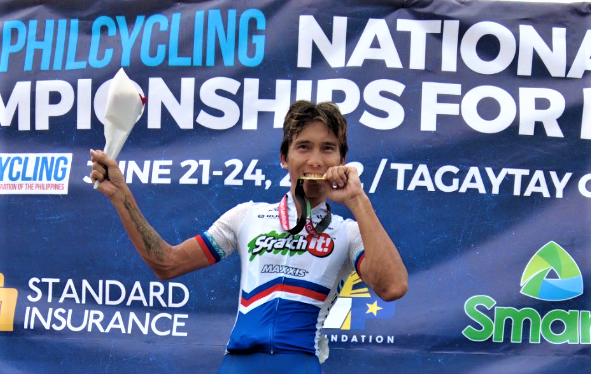 THE TASTE OF GOLD! Jonel Carcueva bites his gold medal during the awarding ceremony. | Photo from Philcycling.

CEBU CITY, Philippines — Minglanilla’s pride, Jonel Carcueva grabbed the spotlight during the finale of the Philcycling National Championship for Road by ruling the men’s elite mass start on Friday, June 24, 2022, in Tagaytay.

Carcueva, who represented Scratch It! of Go For Gold Philippines, finished the grueling 146-kilometer race in three hours, 19 minutes, and 54 seconds to bag the gold medal among 80 riders who vied in the category.

Rounding off the top three in the men’s elite mass start was John Mark Camingao of the Philippine Navy Standard Insurance, who finished the race in 03:20.09.

In his Facebook post, Carcueva thanked his supporters, sponsors, and family. He profusely thanked God for his strength during the lung-busting race.

The race has a high-elevation route traversing the upland areas of Batangas, particularly in Tagaytay, which gave the riders a grinding experience.

The race route featured two strength-sapping climbs, one with a 400-meter elevation traversing the Agoncillo road, and a short but steeper Sungay Road in Batangas.

Aside from Carcueva, other Cebuano cyclists also made a good account of themselves.

Read Next
Fuschia Ravena stunning in a Francis Libiran creation