Tomas cleared of charges over stripping of Mayor’s office 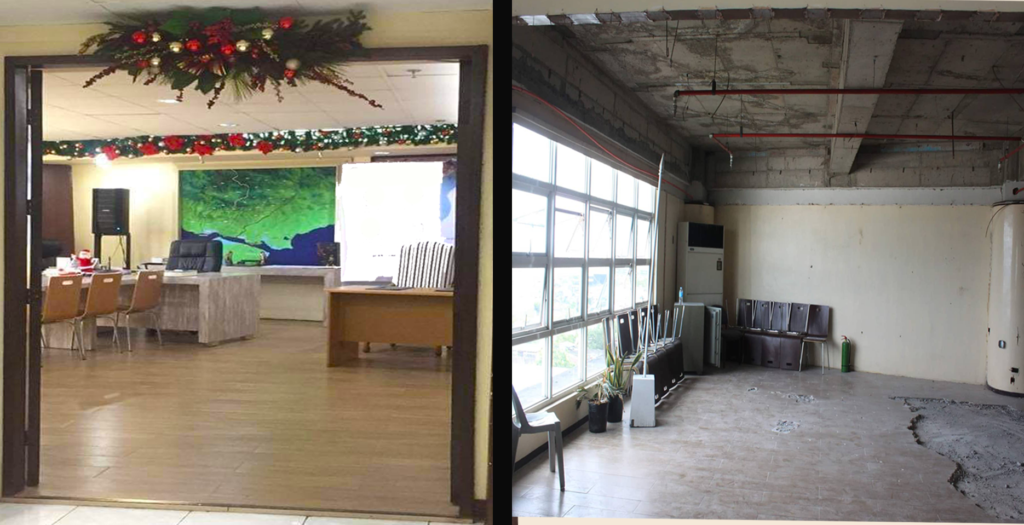 This 2019 photo shows a before-and-after photo of the Cebu City Mayor’s Office.

CEBU CITY, Philippines – Former Cebu City Mayor Tomas Osmeña has been cleared of the criminal charges filed against him over the debacle involving the Mayor’s Office in Cebu City Hall.

The Office of the Ombudsman dismissed criminal complaints against Osmeña and 12 others, including ex-City Hall executives, accusing them of violating the Anti-Graft and Corrupt Practices Act (Republic Act No. 3019) for ‘lack of probable cause’.

The case stemmed in 2019 during Osmeña’s last days as the city mayor.

The then administration of the late Cebu City Mayor Edgardo Labella Jr. alleged that Osmeña, together with former City Hall officials and private individuals, stole and damaged government-owned properties when he stripped his office at the 8th floor of the Executive Building.

They also accused the former mayor of stealing the seal of the City Mayor.

The Ombudsman said the camp of the complainant, a certain Mejelito Cajes, failed to provide substantial evidence to prove that Osmeña and the rest committed several violations against RA 3019.

A copy of the 33-page decision promulgated last March 23, 2021, and signed by Graft Investigation and Prosecution Officer Portia Pacquiao, was furnished to members of the media on Monday, July 11, 2022.

In turn, the respondents cannot be indicted for causing undue injury and damage to the government, they added.

The Ombudsman also pointed out Osmeña was able to debunk claims that he had no intentions to restore the mayor’s office. They also said the former mayor presented proof that the items and furnishings taken out of his office were his personal belongings.

“While there was damage to the mayor’s office, the same was not done for the sole purpose of damaging it. Instead, it was shown to have been a necessary procedure to carry out the intention of respondent Osmeña to restore the office to its condition in 2016…” the document said.

As to the removal of the Mayor’s Seal, the Ombudsman also ruled in favor of Osmeña, saying the former mayor presented documents as proof that it was the complainant who took the seal out of the office.

“This puts an end to the now infamous ‘mayor’s office and missing seal case’,” Ligutan said in a message sent to reporters.

“The truth is finally out- former Tomas Osmeña was only taking what was his, and the approved plan was to restore the mayor’s office to its prior condition in 2016 when mayor Osmeña took office. But he was prevented to do so. And the other camp took advantage of the incomplete restoration process by exposing it to the media,” he added.

Labella tells bizmen: Office of the Mayor in shambles