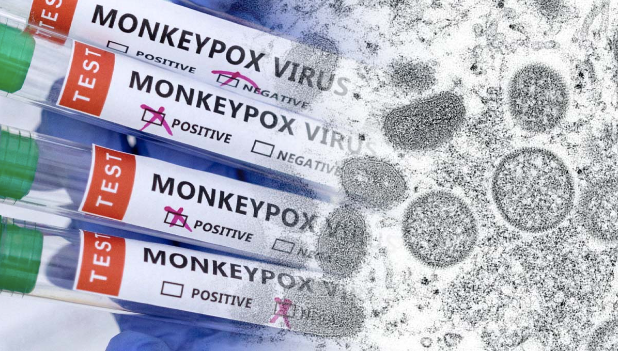 MANILA, Philippines—Almost a week after the World Health Organization (WHO) declared the monkeypox outbreak as a global health emergency, the Philippines recorded its first case amid the rapid spread of the virus across the globe.

On July 23, WHO declared monkeypox as a “public health emergency of international concern“ (PHEIC)—the agency’s highest alarm. The alarm indicates that a coordinated response is needed. It could also unlock funding and global efforts to collaborate on sharing vaccines and treatments.

A few days later, on July 29, the Department of Health (DOH) confirmed that it has detected the first case of monkeypox in the country—a 31-year-old Filipino national who arrived from abroad last July 19.

According to the DOH’s Dr. Beverly Ho, the man had prior travel to countries with documented monkeypox cases. He was tested and confirmed positive for monkeypox virus through reverse transcription–polymerase chain reaction (RT-PCR) done at the DOH Research Institute for Tropical Medicine on July 28. 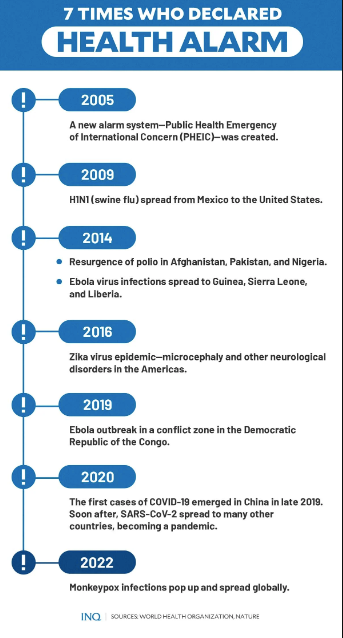 Overall, as of July 27, WHO recorded 62 cases of monkeypox in the region, excluding the one recorded in the Philippines.

In this article, INQUIRER.net will provide more details about the recent WHO declaration, the global monkeypox situation, the most common symptoms among recorded cases, and information on surveillance case definitions and contact tracing.

WHO declaring the highest alarm

Before the WHO declaration, a panel of experts failed to come to a consensus after six members voted in favor of declaring a PHEIC, while nine were against.

International Health Regulations (2005)—a binding international legal agreement involving 196 countries, including all the member states of WHO—defined PHEIC as:

“[A]n extraordinary event which is determined to constitute a public health risk to other States through the international spread of disease and to potentially require a coordinated international response”.

A PHEIC declaration implies that a situation is:

The panel, which WHO explained does not formally vote, had met last June, resulting in only three members in favor of declaring a PHEIC while 11 were opposed. Following the results, WHO chief Tedros Adhanom Ghebreyesus, at that time, decided against sounding the alarm.

Although the declaration was seen as an unprecedented move, many researchers think it was a good decision. Among these researchers was Anne Rimoin, an epidemiologist at the University of California, Los Angeles.

“It sends the right message, and it will hopefully mobilize attention and resources to prevent this virus from gaining a foothold globally,” said Rimoin, who is also a member of the panel and has studied monkeypox in the Democratic Republic of the Congo for more than a decade.

Based on WHO’s records, the organization has declared PHEIC only seven times since the alarm system was created in 2005.

The reasons for the declarations, aside from the monkeypox outbreak, were:

“WHO’s assessment is that the risk of monkeypox is moderate globally and in all regions, except in the European region where we assess the risk as high. There is also a clear risk of further international spread, although the risk of interference with international traffic remains low for the moment,” said WHO chief Tedros.

“So in short, we have an outbreak that has spread around the world rapidly, through new modes of transmission, about which we understand too little, and which meets the criteria in the International Health Regulations,” he added.

“For all of these reasons, I have decided that the global monkeypox outbreak represents a public health emergency of international concern,” he continued.

Based on WHO’s global epidemiological report titled “Multi-Country Monkeypox Outbreak-Global Trends,” as of July 27, there were a total of 19,178 cases of monkeypox reported in several countries across all six WHO regions. 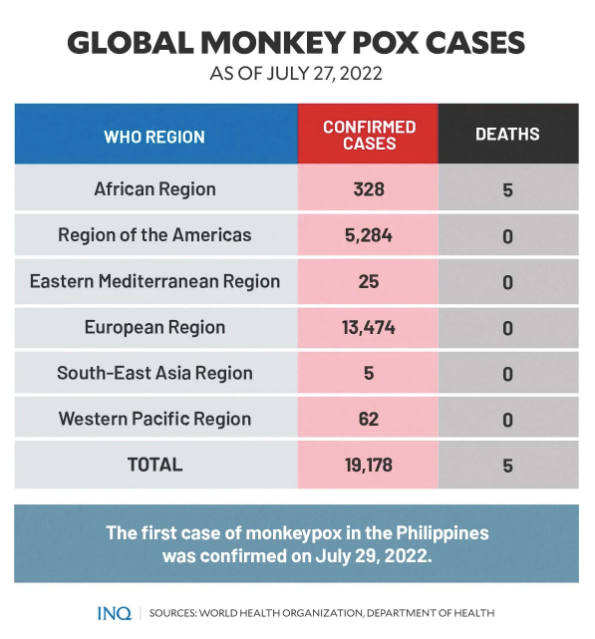 In May, the first cases of monkeypox recorded outside Africa—where the virus occurs primarily, specifically in tropical rainforest areas of Central and West Africa—were reported in those European countries.

READ: Monkeypox: What to know amid unusual rise in cases

The next WHO Region with the highest recorded monkeypox cases was the Regions of the Americas with 5,284 cases, the African Region with 328 cases, and the Western Pacific Region with 62 cases.

The African Region also reported five deaths due to the monkeypox virus.

While studies have shown that the West African type—the variant of the monkeypox virus that causes the current outbreak—is rarely fatal and that over 99 percent of patients who get this form of the virus were found to be more likely to survive.

However, the US Centers for Disease Control and Prevention noted, “However, people with weakened immune systems, children under 8 years of age, people with a history of eczema, and people who are pregnant or breastfeeding may be more likely to get seriously ill or die.”

“Although the West African type is rarely fatal, symptoms can be extremely painful, and people might have permanent scarring resulting from the rash,” the US CDC added.

The Congo Basin type of monkeypox, according to research, has a fatality rate of around 10 percent.

WHO was also able to monitor the most common symptoms present in current monkeypox cases globally.

According to the detailed case data reported by WHO, the following were the most common monkeypox symptoms:

Known symptoms of the monkeypox virus, such as conjunctivitis and sore throat, have not been reported yet in the current cases. 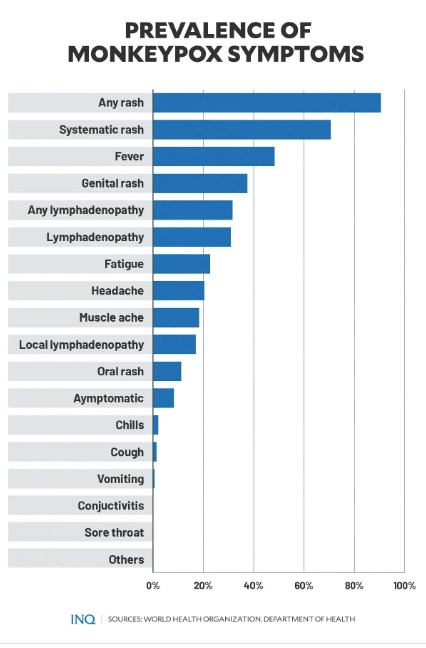 According to WHO and US CDC, the incubation period—the interval from infection to onset of symptoms—of monkeypox is usually 6-13 days. However, it can range from 5-21 days.

Monkeypox is characterized by a chickenpox-like rash or sores over an infected patient’s skin.

These symptoms usually last between 0-5 days, also identified as the invasion period.

Meanwhile, skin eruption or the appearance of a rash can be observed within 1-3 days (sometimes longer) after the occurrence of fever.

WHO said rash tends to be more concentrated on the face and other extremities than on the trunk.

READ: Monkeypox: What to know amid unusual rise in cases

On July 29, DOH said it has completed its case investigation and identification of close contacts of the first monkeypox case in the country.

“Ten close contacts were recorded, of which three were from the same household. All have been advised to quarantine and are being monitored by the department,” Ho said.

Ho said the close contacts did not exhibit any symptoms while they remain under quarantine. Based on guidelines, close contacts need to quarantine for 14 to 21 days upon the onset of symptoms.

“The DOH assures everyone that our public health surveillance systems [can] detect and confirm monkeypox cases,” she added.

When it comes to contact tracing, WHO uses specific case definitions and risk assessments.

There are four specific labels or terms used for cases of monkeypox, namely:

Suspected case: Any person of any age with an unexplained acute rash or one or more acute skin lesions and with one or more signs or symptoms of monkeypox virus.

Probable case: A person meeting the case definition for a suspected case and has had:

Discarded case: A suspected or probable case for which laboratory testing of lesion fluid, skin specimens, or crusts by PCR and/or sequencing is negative for monkeypox virus.

Meanwhile, for risk assessment, WHO explained that a high-risk case involves “direct exposure of skin or mucous membranes to skin or respiratory secretions of a person with confirmed, probable or suspected monkeypox, their body fluids (e.g., lesion vesicular or pustular fluid) or potentially infectious material (including clothing or bedding) if not wearing appropriate PPE (personal protective equipment).”

When there is no direct contact but close proximity in the same room or indoor physical space as a symptomatic monkeypox patient—and if the patient or health care worker is not wearing appropriate PPE—it is considered medium risk.

It is considered low or minimal risk when there is:

Read Next
‘Happy to be back’: Cristiano Ronaldo plays 45 minutes in Man United friendly