CEBU CITY, Philippines — With the proliferation of billboards and signages in Cebu City, the Office of the Building Official (OBO) has reminded billboard operators to secure permit from the office and follow specifications to ensure safety of people and properties.

Catalan, during a media forum on Wednesday, August 3, 2022, acknowledged noticing billboards installed in the City that violated the regulations for billboards and advertising signages.

But because some of the billboards lack operator contact information, Catalan also admitted that serving notices to violators is extra challenging at times.

“Actually, akong nakita is bawal ang back to back, but naa sa actual. So, need to enforce pa the balaod and amo pa ng pandakpon,” he said.

Catalan, however, did not specify yet how many notices they have already sent to erring billboard operators.

The possibility of drafting or implementing a city ordinance requiring billboard operators to display their contact information was also raised during the forum.

Under the five-page EO, newly constructed billboard structures should have at least five meters of setback from the frontage property line, measured perpendicularly up to the support structure.

Existing static billboards or LED billboards with a setback of less than five meters must comply with the guidelines for size of display surface and height of billboard structures and pertinent clearances from the high tension wire as prescribed in the Philippine Electrical Code. 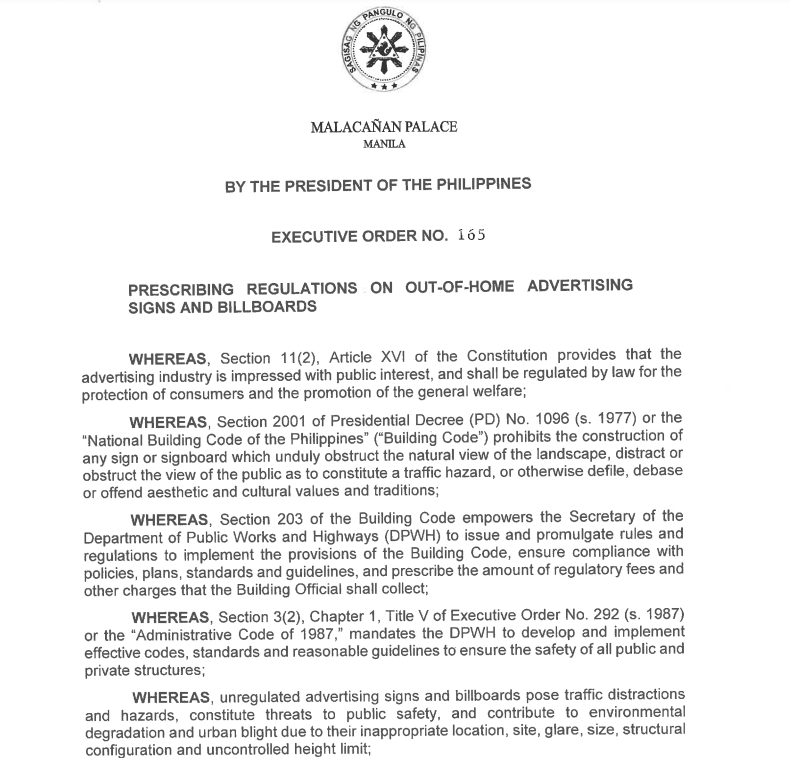 First page of the EO no. 165 signed by former President Rodrigo Duterte./Official Gazette/Wenilyn B. Sabalo