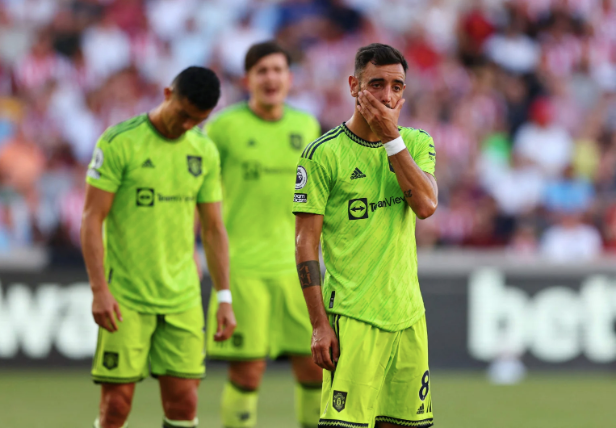 LONDON-A shambolic Manchester United side conceded four goals in the opening 35 minutes in a 4-0 drubbing at Brentford on Saturday as their woeful start to the Premier League season continued.

United’s seventh successive away league defeat was assured long before the interval as Brentford took ruthless advantage of a catalog of errors by the visitors.

The rout began in the 10th minute when United keeper David de Gea allowed a weak shot by Josh Dasilva to slip past him.

Things got worse for United eight minutes later when De Gea played the ball out to former Brentford player Christian Eriksen who was caught in possession and Mathias Jensen slotted home.

When United’s defense failed to deal with a corner and Ben Mee glanced in a close-range header to make it 3-0 the Brentford fans were ecstatic while United’s new manager Erik ten Hag looked ashen-faced in his technical area.

Brentford’s fourth was a gem as Ivan Toney delivered a diagonal ball to Bryan Mbeumo from a counter-attack and Mbeumo calmly beat De Gea.

Ten Hag made three substitutions at halftime with Raphael Varane, Tyrell Malacia and Scott McTominay coming on but despite a slight improvement United offered little fight.

Brentford’s fans serenaded their players with “Hey Jude” at the final whistle while United’s players looked crestfallen as they trudged off rock bottom of the table having also lost their opener at home to Brighton & Hove Albion.

It was the first time since 1960 that United have conceded at least six goals in their first two matches of a top-flight season and the first time they have lost their opening two matches since 1992 when they went on to win the title.

This side, however, looks woefully inadequate to mount any kind of challenge and Ten Hag, who was taunted by the Brentford fans, appears to have a huge job on his hands.

The Dutchman is the first Manchester United manager to lose his first two games in charge since John Chapman in 1921.

“It’s easy to dismantle this United side, just be organized and fight and you’re there,” said former United player and Sky Sports pundit Gary Neville said.

For Brentford, whose starting line-up cost in the region of 55 million compared to the more than 400 million of United’s, have picked up four points in their first two games.

“It was just hard work. We knew the high press would affect them. It was clear to see that if you work hard, you get the result,” Toney told Sky Sports.

“We know they have great talent in there and have some players who can change the game. When you work like we did today and run all over them, you get a result like we did.”

United has Cristiano Ronaldo back in their starting line-up but the Portuguese forward barely got a look in.

The confidence drained out of United from the moment De Gea allowed Dasilva’s shot to end up in the back of the net.

Eriksen, who got a mixed reception from Brentford’s fans, then inadvertently gifted his former club their second as United looked shellshocked by the energy of their hosts who went on to record their biggest top-flight victory since 1938.

Things will not get any easier for United whose next game is against Liverpool.

“It was a horrible day,” De Gea said. “I should have saved the first shot and then the result may have been different.

“Other teams concede one goal and win 5-1. We have to react much better. It was a poor performance.”