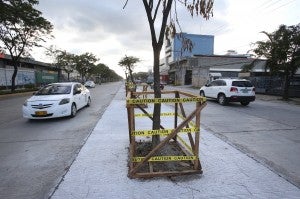 The six trees left on S. Osmeña Road were fenced after two-way traffic was reopened in the area. (CDN PHOTO/ JUNJIE MENDOZA)

Motorists and commuters can breathe easier after the newly cemented portion of S. Osmeña Road was reopened to two-way traffic at 7:15 a.m. yesterday.

Road concreting work by WTG Construction moved to a portion of the road from the corner of Pier 4 along General Maxilom Avenue to V. Sotto Street near Pier 3.

Jeepneys passing through the area already returned to their normal routes.

The 04L jeepneys were again allowed to proceed to Kaoshiung Street located at the back of SM City Cebu before heading back for Lahug.

But Tumulak said there is a need to install a barrier in the middle of the road to segregate the north bound lanes from the south bound lanes.

“We should place divisions to separate the lanes because a driver may commit the mistake of moving to the opposite lane,” he said.

Tumulak said the presence of six small trees in the middle of the road may be a threat  to road users in the absence of a barrier.

WTG Construction already cleared the newly concreted road of its heavy equipment which they transferred near Pier 4.  Even piles of soil have been removed from the road.

Removal of existing asphalt from the seaside lane of the road was already made about two months ago.