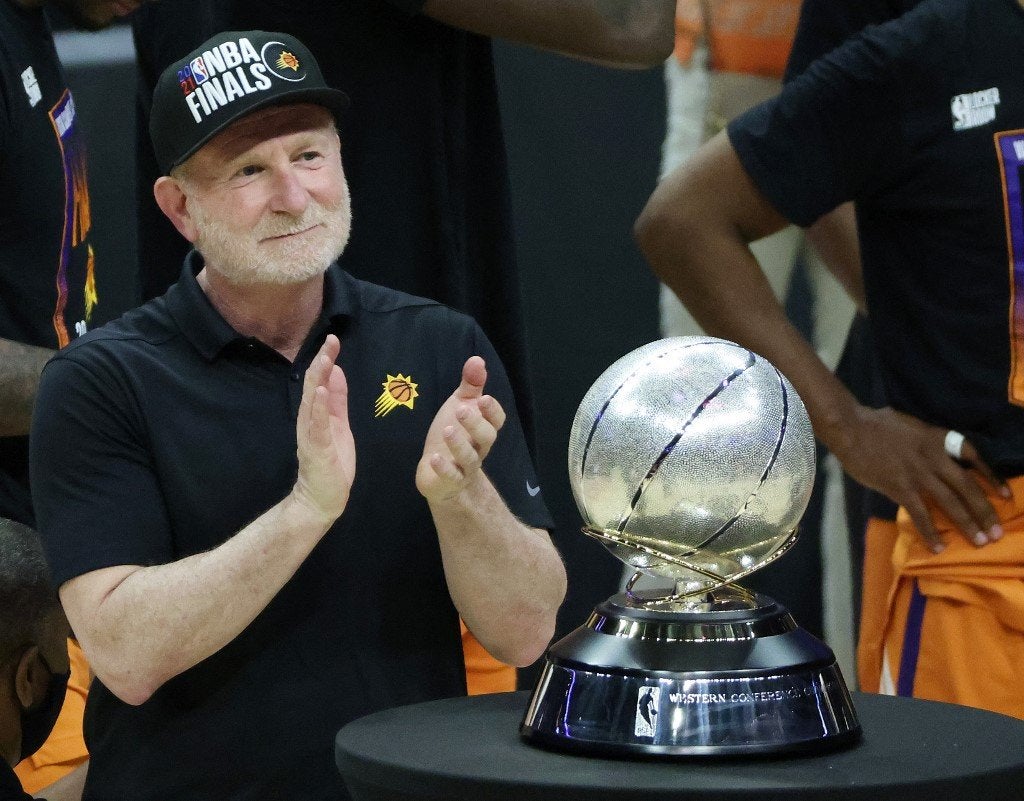 Owner Robert Sarver stands with the Western Conference Championship trophy after the Suns beat the LA Clippers to win the series in Game Six of the Western Conference Finals at Staples Center on June 30, 2021 in Los Angeles, California. The Suns beat the Clippers to advance to the NBA Finals.
FILE–Phoenix Suns owner Robert Sarver. Harry How/Getty Images/AFP

NBA stars LeBron James and Chris Paul blasted the NBA for imposing what they consider a light punishment on Phoenix Suns owner Robert Sarver for racist and misogynist remarks.

Sarver was fined $10 million and issued a one-year suspension from league activities on Tuesday to cap a 10-month probe into 18 years of improper activities and the difficult workplace environment they created.

NBA commissioner Adam Silver said Wednesday there was never a discussion of forcing Sarver to sell the team, a penalty imposed upon former Los Angeles Clippers owner Donald Sterling in 2014 for racist remarks.

Silver said he did not think the violation rose to that level.

But four-time NBA Most Valuable Player James was among those who don’t see any place in the NBA for Sarver in the future.

“Read through the Sarver stories a few times now. I gotta be honest… Our league definitely got this wrong.” James tweeted Wednesday evening.

“I said it before and I’m gonna say it again, there is no place in this league for that kind of behavior.”

“I love this league and I deeply respect our leadership. But this isn’t right. There is no place for misogyny, sexism, and racism in any work place. Don’t matter if you own the team or play for the team,” he wrote.

“We hold our league up as an example of our values and this ain’t it.”

Paul, a star point guard for the Suns who also served two terms as NBPA president, said he, too, wanted to see greater punishment issued to Sarver.

“Like many others, I reviewed the report. I was and am horrified and disappointed by what I read,” he said on Twitter Wednesday. “This conduct especially towards women is unacceptable and must never be repeated.”

“I am of the view that the sanctions fell short in truly addressing what we can all agree was atrocious behavior. My heart goes out to all of the people that were affected.”