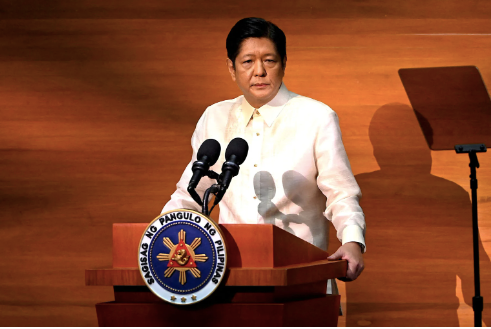 NEW YORK CITY, United States — Looking at the current state of the illegal drugs problem in the Philippines, President Ferdinand “Bongbong” Marcos Jr. on Friday (Saturday Manila time) said that while he cannot stop the drug war that was pursued by former president Rodrigo Duterte, he is taking a “slightly different” approach.

Unlike the tact of former President Duterte, which focused on law enforcement against illegal drugs, Marcos said his administration will focus on prevention and rehabilitation.

“I think we have found — it is certainly my view — that enforcement, which has been the part of the drug war that has been most vigorously pursued by President Duterte, only gets you so far,” he said.

He said he is looking at education of the youth on the effects of illegal drugs in their lives and also helping heal those who are already addicted to illegal subtances.

“We are trying to learn which are the best methods now to pull our victims — really is what they are — pull them out of that culture and to help them start again and do live a good life as good and constructive members — contributing members of society,” the President said.

He also said his administration will go after big-time drug peddlers, instead of small-time drug pusers.

“I’m not interested in the kid who makes 100 pesos a week selling weed. That’s not the person that I want you to go after,” Marcos said, recalling his command conference with the country’s police force.

Marcos’ Interior Secretary Benhur Abalos earlier said there will be no let up in the country’s war against drugs, saying it would be as “intensive as before.”

“The drug war will be pursued relentlessly in accordance with the oaths I would be taking and on the basis of the Constitution,” Abalos earlier said.

About three people are killed daily in legitimate anti-drug operations by authorities during Duterte’s term, based on the latest government-released figures.

Local and international human rights groups, however, reported a much higher figure — as many as 30,000 were killed by 2019 — if suspects killed by unidentified gunmen and vigilantes were included in the tally.