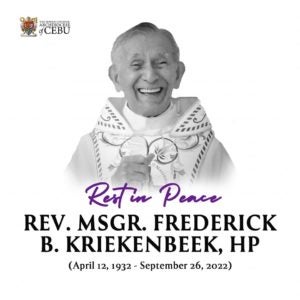 Photo courtesy of The Roman Catholic Archdiocese of Cebu

CEBU CITY, Philippines — The Archdiocese of Cebu announced on Tuesday, September 27, 2022, the death of Rev. Msgr. Frederick “Fred” Kriekenbeek, who was one of the pioneering exorcists in the archdiocese.

In a statement on social media, the Archdiocese of Cebu asked all the lay faithful to offer special prayers for Kriekenbeek’s eternal rest.

Msgr. Joseph Tan, the spokesperson of the Archdiocese of Cebu, said that based on what he knows, Kriekenbeek died of old age.

Kriekenbeek, born on April 12, 1932, used to serve in the various parishes of the Archdiocese.

Kriekenbeek was a former parish priest of St. Joseph The Worker Parish in Tabunok, Talisay City, and of Sto. Rosario Parish in Cebu City.

Tan said Kriekenbeek was known to be the first priest to have been involved in the charismatic movement in the 1980s.

“He is known to have been the first sa mga pari na na-involve sa charismatic movement in the 80s when it was not very popular pa sa clergy sa Cebu. Pag-abot niya, he was the one who first adapted it, kanang charismatic movement,” he told CDN Digital.

Kriekenbeek was also a pioneering exorcist in Cebu.

Tan said the late monsignor, during his time, was like the “default” priest sought to administer for those cases requiring deliverance.

At present, Tan said the archdiocese already has a committee or office for deliverance and exorcism, composed of about six priests.

Meanwhile, details on Kriekenbeek’s wake and funeral have yet to be announced as of this writing.