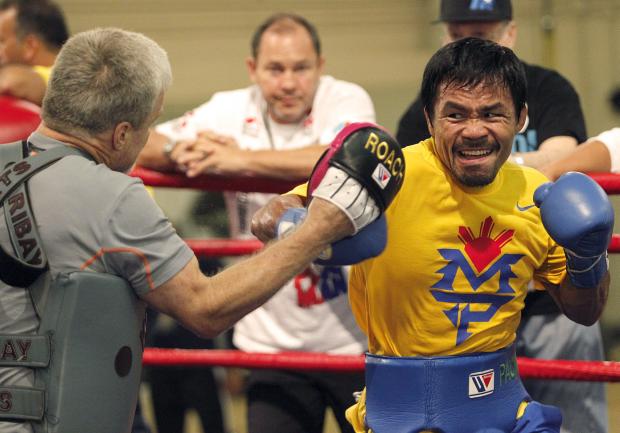 Manny Pacquiao, right, trains at the Cotai Arena Gym of the Venetian Resort and Casino in Macau with trainer Freddie Roach in this Nov. 18 file photo. Pacquiao and Chris Algieri of the United States are scheduled to meet in a title showdown this Sunday in Macau. (AP)

Macau— American trainer Freddie Roach came ready with a curt reply when asked if Chris Algieri has a chance of winning over his prized ward Manny “Pacman” Pacquiao.

So why did Algieri agree to fight Pacquiao if he has no chance of winning?

“This is a world title fight and you want to make money,” said Roach.

Algieri will come into this Sunday’s fight with a perfect record of 20 wins laced with eight KOs. But Roach isn’t impressed.

“Manny is an eight-division world champion. Algieri is just learning boxing. They are not in the same level,” said Roach.

While many believe that the five-foot-six Pacquiao, who is turning 36 on Dec. 17, has lost some sting in his punches, Roach still thinks that the Saranggani representative will still dominate Algieri when they clash on Sunday (around 12:15 in Manila) at the Cotai Arena of The Venetian-Macau.

“Manny is faster. Manny is more explosive. Chris can punch but he doesn’t have power,” said Roach. “They say Manny looks fast on TV. On top of the ring, you will be even more overwhelmed with his speed.”

Pacquiao (56W-5D-2D-38KOs) hasn’t scored a knockout since 2009 when he pulled off a TKO win over Miguel Cotto at the MGM Grand in Las Vegas, Nevada. But it doesn’t mean that the Pacman’s power has diminished, according to Roach.

“Manny is just being compassionate. He’s being nice. He’s telling me that ‘I just want to win the fight. I don’t want to hurt people.’ But I told him people are trying to hurt you. I hope that’s enough motivation for him because one punch can change a fight and that’s why

Against Algieri, Roach is expecting a fierce Pacquiao.

“He’s really fired up. I like everything I see. First time I’ve seen for a while that he knocked down two sparring partners. He’s mean on the mitts. Before, he says sorry when he hits me doing the mitts but now he just continues even if he’s hurting me. He’s very focused and all we have to do now is bring this into the fight,” said Roach.

With his five-inch height advantage, Algieri is expected to use his jabs and not engage Pacquiao in a brawl.

“Good thing about Manny, he’s a realist. He knows that anyone can get knocked out in boxing. When I got knocked out, it changed my whole life. When Manny got knocked out, it didn’t change his style and heart. It doesn’t bother him. Manny deals with it better than most people,” said Roach, a former boxer.

During yesterday’s roundtable interview at the media center of The Venetian-Macau, Roach’s relaxed tone changed when the American trainer was asked about the possibility that Algieri might do to Pacquiao what he did to Ruslan Provodnikov.

“You don’t compare Ruslan to Manny. They are worlds apart. Ruslan is a young fighter and Manny is an eight-division world champion. It’s not fair to compare Manny to Ruslan,” a clearly miffed Roach said.

Algieri’s claim to fame was his split decision win over Provodnikov last June, a resounding victory that netted him the WBO junior welterweight title. Now, he’s looking to make his star shine brighter by beating another fighter who trains under Roach, something that is easier said than done.