When achieving academic excellence is a recurring theme in your life story, it should come as no surprise to see your name among the list of successful examinees who top board licensure examinations. But for Ann Millennie Caballero Antoque, who garnered the 9th highest place in the September 2022 Social Worker Licensure Examination, the news was a happy but unexpected revelation.

The 22-year-old topnotcher has an exemplary academic record, graduating with honors in her elementary and senior high school years. She was a consistent Dean’s Lister during her undergraduate years, taking up Bachelor of Science in Social Work at the University of Southern Philippines Foundation. She credits these accomplishments to being raised in a family that values education and believes that success will be achieved through learning. She acknowledges the sacrifices of her parents, Anacleto D. Antoque and Ma. Annabelle C. Antoque, emphasizing how much she appreciates that they did their best to send them to good schools and support their educational needs even though they are not well-off. And in order to reciprocate, she persevered and worked hard on her academics.

The future is bright, not just for Ann Millenie and our new Social Workers, but also for the Filipino community who will benefit from our brand-new agents of positive change.

But it’s not always butterflies and rainbows, as the song goes. Despite reaching the required grade average to qualify for Latin Honors, Ann Millennie had one grade below 2.5 from a subject in her freshman years which rendered her ineligible. While deeply upset that she was unable to fulfill her dream of making her parents walk on stage on her graduation day, she gradually learned to accept that it was probably not for her. 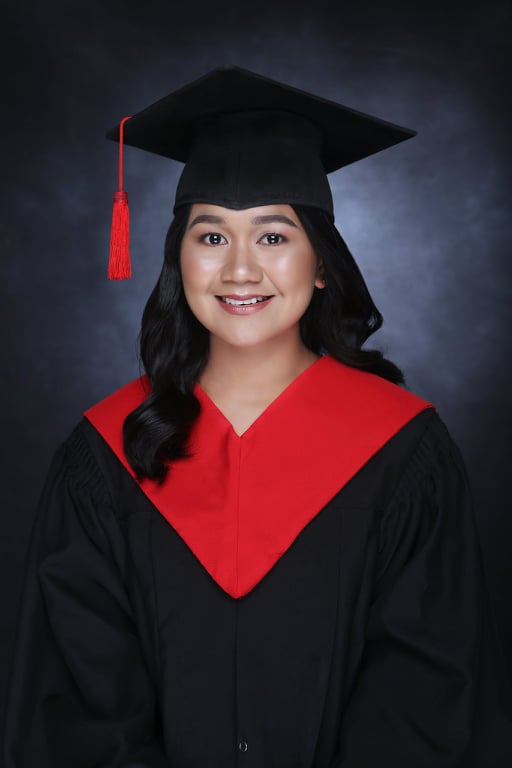 “God has bigger and better plans for me than I have for myself,” Ann Millennie shares.

And it did not take long for this statement to manifest. Reaping the rewards of her dedication and persistence, reading from six in the morning until five in the afternoon, Ann Millennie learned of the good news through a text message from her dean at exactly 10:05 in the evening as she was preparing to sleep.

Ann Millennie acknowledges that she is an ambitious individual who works hard to achieve what she considers success. While she feared the possibility of not making it considering the amount of books to read with so little time, she continued to believe that hard work will never go in vain. She created a timetable and devoted more of my time on subject areas she found difficult to grasp. She deepened her understanding of the board subjects by attending the review sessions handled by the USPF College of Social Work and learned different strategies in answering questions and eliminating irrelevant choices to come up with the best answer. She strived to be consistent, which she found was the perfect supplement to hard work and perseverance – the key factors in acing the board exam.

And yet, apart from her own efforts and sacrifices, she recognizes that earning this success was also largely thanks to the people behind her becoming who she is – God, her family, USPF, the College of Social Work, and her professors. Though she had doubts in her capacity, she believes God cast her worries aside and blessed her more than she deserved. She considers her family the ultimate lifeline to whom she can run to, whatever situation she may be facing. And she shares how her alma mater, her college, and her professors have all played a vital role in her success, specifically citing how they have made her little passion to serve humanity flourish into a great profession. 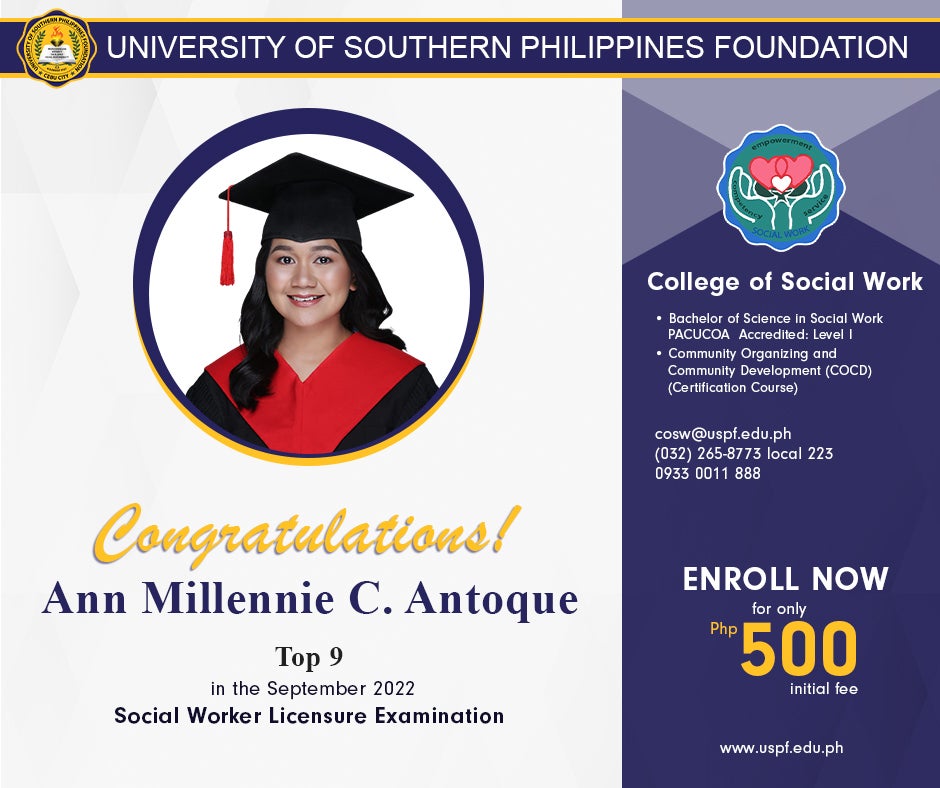 On her end, Dean Rose Sequitin of the USPF College of Social Work shares that they learned that cooperative learning is more effective than studying alone for board examinations, so the college decided to house the examinees in the university’s dormitory where they were regularly monitored by the faculty. The examinees organized study groups and prepared questions to quiz their group members. With the help of faculty members, who are experts in their fields of specialization, students were trained on analyzing questions and answers and not merely memorizing.

In addition to addressing the cognitive needs, the College also ensured that the mental health and spiritual needs of the examinees were well taken care of.  “Positive stroking, motivation and encouragement were provided by the group and the faculty for those who experienced anxiety, discouragement, and stress. Our approach was holistic. But, on top of all that, we showed them that we believed in them,” says Dean Sequitin.

Ann Millenie’s feat and the remarkable passing rate of this year’s batch of examinees is a testament that the USPF CSW’s holistic approach works. With such a solid foundation on social work established during their undergraduate years, professional growth is definitely within their reach.

“I plan to start a career in a non-government setting. I also plan to pursue my master’s degree in Social Work here at USPF,” Ann Millenie quips. She adds that USPF is more than just an academic institution and decides to call the institution a “life-changing foundation.” She highlights how quality teaching is combined with a relaxed and friendly atmosphere – “like a family,” to borrow Dean Sequitin’s words. 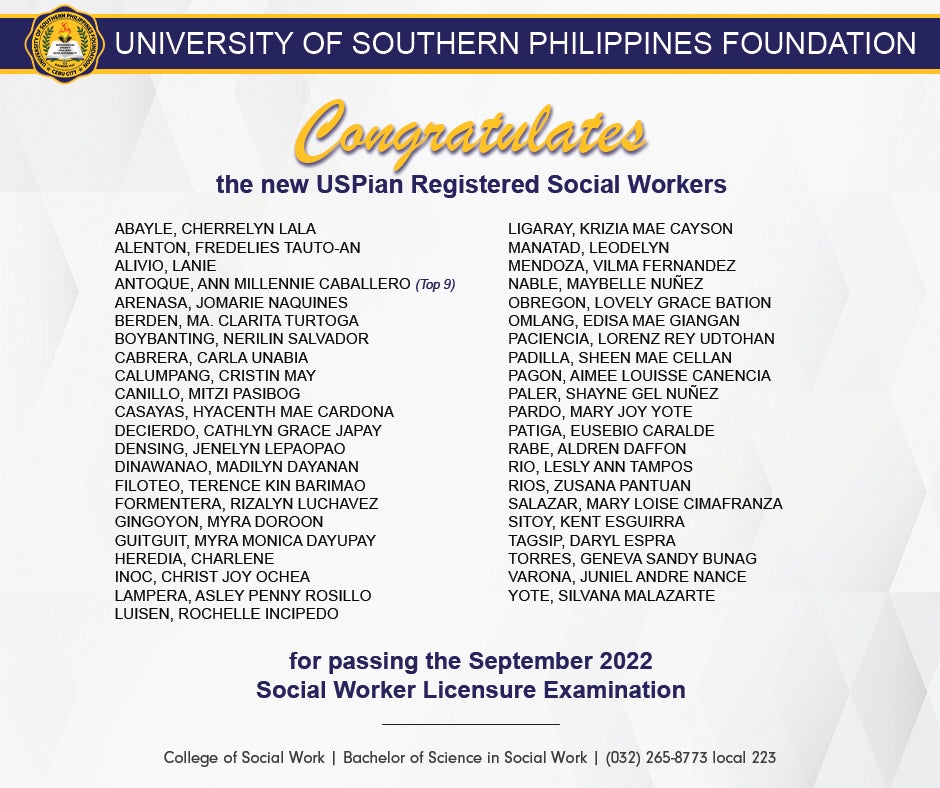 Ann Millenie further shares that she is thankful for supportive teachers and staff who believe that all students can learn and meet high standards while also recognizing that some students have to overcome significant barriers. Dean Sequitin sheds further light on this perspective, sharing that “At the CSW of USPF, we welcome you with open arms and heart. You need not be an achiever. We believe that the passion to help, to achieve one’s goal, and to be the best social worker you can be is the most important ingredient to succeed.”

Excited for what the future holds, we look back at the very reason that Ann Millenie chose Social Work for a college course. She shared, “Life is a God-given gift, living it without aim is pointless. It must be spent with a purpose. Seeing innocent eyes striving to surpass the struggles, tiny hands trying to reach little dreams, and genuine smiles despite the hardships of life gave me the thought of filling it with hope. Truly everywhere at all times, there are people who have needs and problems beyond their own capacity for solution. I wanted to be that someone who does not merely listen to unending problems, but someone who can present attainable solutions to be of help to those in need.”

The future is bright, not just for Ann Millenie and our new Social Workers, but also for the Filipino community who will benefit from our brand-new agents of positive change.