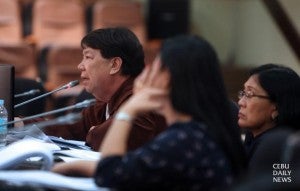 The Cebu City Council yesterday questioned two items, worth P70 million in the proposed 2015 budget of the Department of Social Welfare.

Councilor Sisinio Andales said the P40-million allocation for the solo parents assistance should not be included in the budget since by next year, no solo parent is qualified to get the P5,000 dole out as provided for by the Solo Parents Ordinance.

The majority also questioned the Cebu Citizen Card, a local ID system which was allocated P30 million under the DSWS proposed budget as the project may violate the right of privacy of residents.

Among the qualification of solo parents to avail of the P5,000 cash assistance from the City Hall is for one to have voted in three elections.

Andales said that if the ordinance were to be followed, distribution of the assistance would start after the conduct of the next three elections.

“An ordinance cannot be retroactive. The past three elections cannot be counted.  An ordinance should be prospective. We cannot retroact the law,” he said.

The allocation, he said, would be better spent if allocated for more important appropriations of the city.

DSWS head Ester Concha said that they already registered 4,080 solo parents who wanted to avail of the  assistance.  Applicants are from the north district – 1, 938 and south district – 2, 142.

Councilor Margot Osmeña, head of the council’s budget committee, asked Concha if they have also validated applications of the cash assistance based on the below P60,000 annual income bracket required in the ordinance.

“That is more difficult to do.  It is easier to validate voting in the election,” she said.

Councilor James Cuenco asked fellow councilors to defer action on the P40 million allocation for solo parents until such time that they are able to clarify the commencement of the voting requirement mentioned in the ordinance.

Councilor Noel Wenceslao defended Concha saying she was only doing her job but suggested that there may be a need to seek the opinion of the City Legal Office.

The council should also revisit the minutes of their discussion when the council had the solo parents ordinance of councilor Gerardo Carillo passed earlier this year, said Councilor Mary Ann delos Santos.

Carillo was not present when the budget for the Solo Parent Ordinance was deliberated.

Andales also raised the same concern on the P30 million allocation proposed by DSWS for the implementation of Cebu Citizens Card, a local ID system.

“We cannot put anything on the budget based on a loose concept,” he added.

He also raised objections to the proposed national ID system that has been questioned as it violates certain rights like the right to privacy.

Concha explained to the council that the card that they are proposing is an ID card with radio frequency identification (RFID). RFID consists of a small chip and an antenna. It has a similar function as a bar code or a magnetic strip on the back of ATM cards.

But unlike other machine readable cards, RFID enabled cards need not be swiped to a scanner, but can be read remotely, raising privacy and data security issues.

Osmeña also asked the executive department already picked a service provider for the program or if this would still be made to undergo bidding.

City Administrator Lucelle Mercado came to Concha’s rescue. She told the council that the card provider will be chosen through public bidding.

Osmeña said that the council will have to also defer action on the citizens card proposal “until you are ready to give us the details.”

The budget committee chair as Mercado to submit to the council documents that would explain the importance of having the Citizens Card program.

DSWS is asking a budget of P359.7 million this year or P129.7 million more than this year’s appropriation of P230 million.

The DSWS is also asking a P5.3 million increase to the P7.2 million allocation for the Operation Second Chance that houses children in conflict with the law.

The increase will cover the cost of hiring casual workers to occupy post that would be vacated by the Bureau of Jail Management and Penology (BJMP) should they push through with a plan to already pull out from the facility.

Concha also wanted an increase by P14.25 million the P750, 000 allocation for individuals in crisis situation. The allocation will be spent in giving out fares and cash assistance to city residents and transients who wanted to return to their provinces.