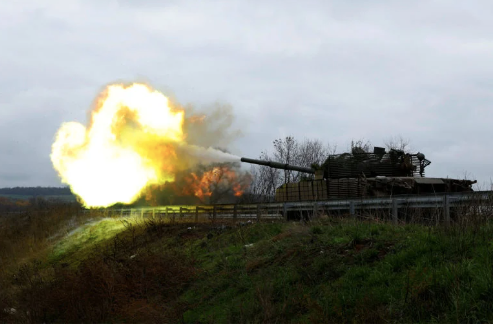 Ukrainian soldiers fire a round on the frontline from a T80 tank that was captured from Russians during a battle in Trostyanets in March, as Russia’s invasion of Ukraine continues, in the eastern Donbas region of Bakhmut, Ukraine, November 4, 2022. REUTERS FILE PHOTO

WASHINGTON — America’s top general estimated on Wednesday that Russia’s military had seen more than 100,000 of its soldiers killed and wounded in Ukraine, and added Kyiv’s armed forces “probably” suffered a similar level of casualties in the war.

The estimates could not be independently confirmed by Reuters.

But Mark Milley’s remarks offer the highest U.S. estimate of casualties to date in the nearly nine-month-old conflict, and came as Ukraine and Russia face a potential winter lull in fighting that experts say could offer an opportunity for some kind of negotiations.

Asked about prospects for diplomacy in Ukraine, Milley noted that the early refusal to negotiate in World War One compounded human suffering and led to millions more casualties.

“So when there’s an opportunity to negotiate, when peace can be achieved … seize the moment,” Milley told the Economic Club of New York.

Earlier on Wednesday, Russia announced its troops would withdraw from the west bank of the Dnipro River near the strategic southern Ukrainian city of Kherson, in a significant setback for Moscow and potential turning point in the war.

Some experts say the latest setback for Moscow could allow Ukraine to negotiate from a position of strength while others argue that Russia might use negotiations to buy time to reset and refit its forces for a renewed spring offensive.

Milley said the initial indicators suggested Russia was following through with its withdrawal from Kherson. But he cautioned that it could take time to complete.

“It won’t take them a day or two, this is going to take them days and perhaps even weeks to pull those forces south of that river,” Milley said, estimating that Russia probably had 20,000 to 30,000 troops north of the Dnipro river in that area.

The United States and its Nato allies have stopped short of direct intervention in Ukraine, but are arming, advising and enabling its military to defend Kyiv against Russia’s invading armies.

Milley said the conflict so far had turned anywhere from 15 million to 30 million Ukrainians into refugees, and killed probably 40,000 Ukrainian civilians.

“You’re looking at well over 100,000 Russian soldiers killed and wounded. Same thing probably on the Ukrainian side. A lot of human suffering,” Milley said.

Despite the high casualty numbers, U.S. officials say that Moscow has been unable to achieve its objectives in Ukraine and have raised questions about how long Russia will be able to sustain an invasion that has also decimated much of its mechanized ground forces and sapped artillery stockpiles.