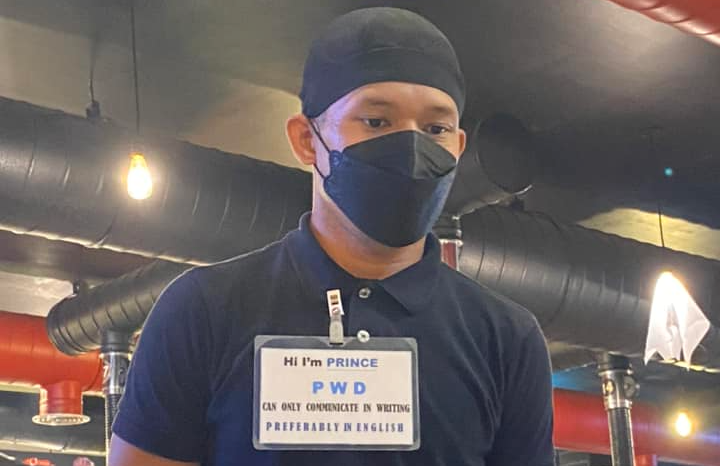 CEBU CITY, Philippines — The story of a person with disability (PWD) working as a waiter in a Korean barbecue and grill in Cagayan de Oro City recently became a source of inspiration and joy for netizens.

Netizen Ericka Mae Patalinghug took to social media to share her inspiring encounter with Kuya Prince while her family was having dinner in a samgyuspal restaurant in a mall in the northern Mindanao city last November 11.

Kuya Prince, whose real name is Runiell Prince B. Waminal Jr., is a PWD.

While waiting tables at the samgyupsal spot, he wears an ID saying he will take their order in writing. He also asked customers if they could communicate with them through writing, preferably in English.

“I was so happy to meet Kuya Prince, who served our food last night. Even with his condition, he quickly responded to our needs and happily assisted us. He’s a PWD and can only communicate through writing,” portions of Patalinghug’s captions read.

She also lauded the restaurant’s management for taking a chance on the PWD.

“Kudos to Romantic Baboy, who opened their doors to persons with disability just like Kuya Prince,” Patalinghug said.

“To Kuya Prince, thank you for your outstanding service. More power and continue to inspire more people,” she added.

Patalinghug’s post quickly went viral on Facebook. As of Sunday, Nov. 13, it received more than 139,000 interactions and has been shared over 50,000 times.

Patalinghug and netizens also commended the restaurant and gave their huge respects to Kuya Prince.

“I hope more companies will open their doors to people like Kuya Prince,” she said.