The medieval heart of our prisons 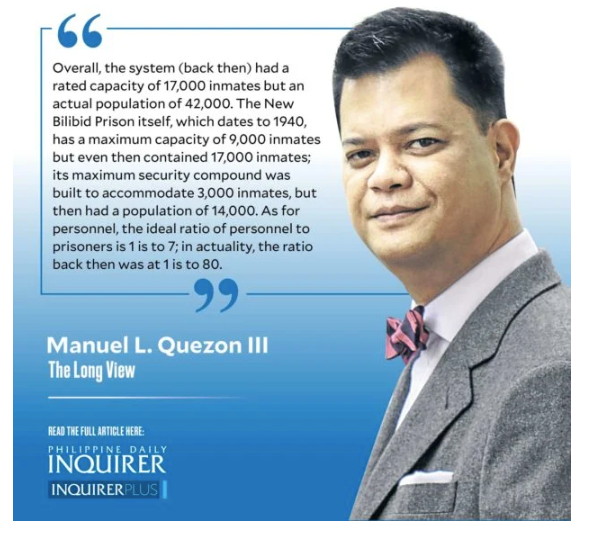 A longer period of time (82 years) separates the present day (2022) from the institution of the New Bilibid Prison in 1940, than separates the institution of the Old Bilibid Prison in 1865 and the creation of its successor facility in Muntinlupa (75 years). These contrasting stretches of time starkly shows how overdue a new national penitentiary has been. At the heart of the inaction lies a conundrum: what was once a distant facility is now prime land, representing a spectacular windfall for any administration able to muster the political will to decree the closing down and relocation of the facility; conversely, it is in no one’s broader interest to permit any administration to enjoy such a windfall. Ignoring, of course, what would be basic in other lands and governments: the building itself is too history to be alienated and disposed of; it would, instead, be subjected to creative adaptation and reuse. Then again, if our governments couldn’t get around to adaptively reusing Old Bilibid (it was as far back as 1938 earmarked for reuse as a bus transport hub for Manila, but instead became the Manila City Jail), it’s no surprise New Bilibid remains stuck.

To be sure, ritual noises are made from time to time, the most recent being an August announcement by the Department of Justice (DOJ) that it would transfer some of the inmates of the New Bilibid Prison, to the currently mothballed grandly designated Mega Drug Abuse Treatment and Rehabilitation Center in Fort Magsaysay, Nueva Ecija. This was a white elephant composed of 75 shipping containers made possible by a donation by Huang Rulun. But even the DOJ, when it trumpeted the conversion, noted that it still has to clear up questions of jurisdiction with the departments of health and national defense. The truth is, discussions remain focused on achieving some sort of glittering Alcatraz-like facility when the real questions to be discussed are far more boring, but necessary: do we imprison, and allow to languish in prison, far too many people in the first place? And do we need one national penitentiary in an era when our population has exploded, and at the very least, we should explore a greater dispersal of penal facilities in a country rapidly running out of areas that can be considered remote, if the idea is to continue to isolate prisoners from the general population? We were once headed toward an ambitious, because humane, revisiting of our entire penal code, for example; but one of its leading proponents is now a political prisoner, and we have gone backwards in our communal attitude toward prison and jail in the first place.

The Commission on Audit (COA) for its part has warned that parcels of land donated for penal use are in danger of being lost to the bureau of jails because 108 such lots remain untitled. The COA has published gruesome statistics on overcrowding in other Bureau of Jail Management and Penology facilities: San Mateo at 2,696 percent, Dasmariñas City at 2,283 percent, and Muntinlupa at 2,146 percent. Here’s the clincher: 90 percent of detainees are “awaiting/undergoing trial and awaiting judgement.”

Almost a decade ago, Dr. Raymund Narag, an assistant professor in Southern Illinois University, published an NCPAG paper (“Understanding the conditions of New Bilibid Prisons: Implications for Integrated Reforms”) which, among other things, summarized the bursting-at-the-seams state of our penal system as follows. Overall, the system (back then) had a rated capacity of 17,000 inmates but an actual population of 42,000. The New Bilibid Prison itself, which dates to 1940, has a maximum capacity of 9,000 inmates but even then contained 17,000 inmates; its maximum security compound was built to accommodate 3,000 inmates, but then had a population of 14,000. As for personnel, the ideal ratio of personnel to prisoners is 1 is to 7; in actuality, the ratio back then was at 1 is to 80. Add to this perennially miserly budgets, whether for food, medicine, or even maintenance, and the mystery is how things aren’t much, much worse than what the paper summarized as “always under media spotlight due to observance of practices that are considered ‘scandalous’ by outside observers,” which is putting it mildly.

The paper makes for interesting reading, but a couple of points deserve amplification. The first is that the catastrophic congestion requires ad hoc solutions: prison personnel, for example, must rely on prisoners to police or merely administer, an institution continuously crumbling in terms of its infrastructure, while the entire, bloated prison population represents a society on the verge of collapse on practically every score. Over time, temporary solutions become codified, institutional scar tissue which makes the supposed purpose of our penal system—one aimed at correction and not just punishment—even more impossible to attain. This is a situation, in a sense, public opinion, for all its going into hand-wringing and finger-pointing every time there’s a scandal, has made not just possible, but inevitable. We are not a society that puts a premium on the human treatment of prisoners, even though the laws and the system that upholds those laws make things much harsher for the poor than the merely middle class, much less the upper class.

These contrasting formal and informal systems (in 2016, I had a fascinating conversation with Gang Capati who long conducted education outreach efforts in New Bilibid) are old as human society itself: the traditional system has always been that primitive, bestial conditions in state prisons could be, and were indeed expected to be, tempered by the ability of individual prisoners to pay for perks. Everyone in and out of prison understood this to be the way of the world. It remains the way of our jails to this day; when the roving eye of public opinion makes a period sweep into the world of our prisons, the usual palabas takes place, but things have to revert to the old mercenary ways, otherwise there would either be a mass extinction or a mass revolt or both in the jails, which would be worse for officialdom, knowing the same public opinion would never tolerate investing in what it takes to actually have a humane penal system.