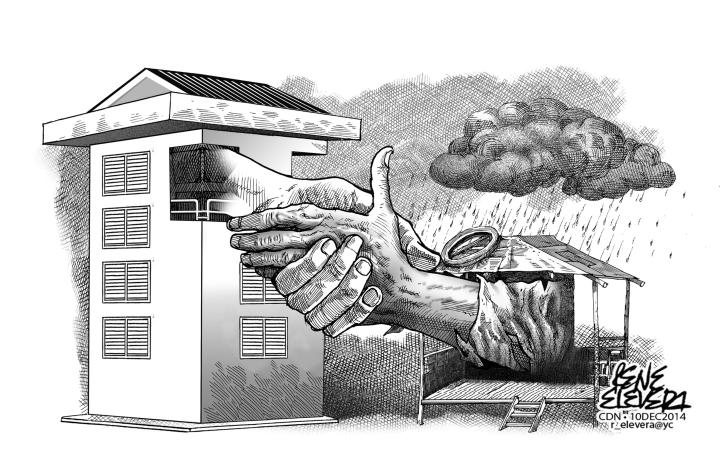 Daanbantayan resident Vina Caliza said this in explaining  why she  and her American husband,  Norman Hendrickson, gave shelter to three families. Two of the families were neighbors while the third, the Dublins,  lived in the coastal barangay of Tapilon.

The “household evacuation” scheme was implemented by the Daanbantayan municipal government as an alternative since not everyone could be  accommodated in the town’s limited government evacuation centers.

The Caliza family demonstrated a longstanding virtue  espoused by Jesus Christ, who talked about who one actually serves by accepting strangers: “For I was hungry and  you gave me food: I was thirsty, and you  gave me drink: I was a stranger, and you took me in.”

It’s no small coincidence that this  neighborly gesture during typhoon Ruby recalls the Bethlehem story of  Jesus Christ’s family looking for lodging.

Before Ruby struck, Cebu Archbishop Jose Palma ordered parish   churches  to open their doors to evacuees.  He also  issued a mandatory prayer or Oratio Imperata, to implore divine intervention to keep the country safe by the storm.

Was the overflow accommodated in local churches as Palma directed?    Were there other families that opened their doors? We’d like to hear more.

In times of calamity, when government presence is thin, especially in rural areas, communities turn first to relatives, neighbors and the local church.

The stone and concrete churches are also likely among the strongest structures in the area.

To recall, the  Cagayan de Oro Archdiocese was  among those who spearheaded the relief effort for  families affected by typhoon Sendong in 2011.

“In fact, in Tacloban, I’m happy to note that among the first to open their doors during Yolanda were the Redemptorists,” Palma said.

The emergency homestay program stems from the value of “bayanihan”, a genuine concern of a neighbor for another. The actual help extended is a demonstration of charity.

In future disasters, we can draw on this baseload of goodwill, notwithstanding the scarce resources that prevail  and the real possibility that some may exploit the generosity of their host families.

Those who manage temporary evacuation centers  –public schools, gyms — complain about the garbage left by  evacuees and even about  missing doorknobs.   But that doesn’t detract from the generous spirit of  unheralded families like the Hendricksons in Daanbantayan who put up with  a temporary inconvenience because saving lives is more important.