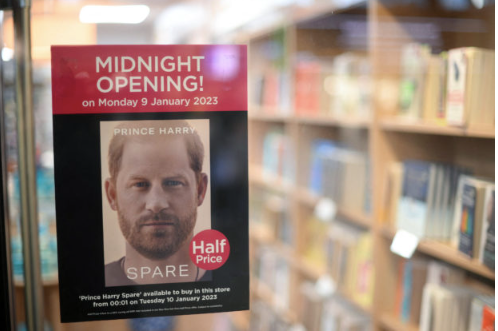 A poster advertising the forthcoming publication of the book ‘Spare’ by Britain’s Prince Harry, Duke of Sussex, is pictured in the window of a book store in London on January 6, 2023. AFP

LONDON — Prince Harry faced a backlash Friday over his memoir “Spare”, with criticism from the media, commentators, army veterans and even the Taliban, while Buckingham Palace kept silent on its widely leaked contents.

Days before the official publication on Tuesday, disclosures from the book dominated headlines and airwaves after a Spanish-language version of the memoir mistakenly went on sale in Spain.

Revelations, including an alleged physical attack on him by heir to the throne Prince William, how he lost his virginity, took drugs and killed 25 people in Afghanistan, have prompted both condemnation and derision.

Writer A.N. Wilson called the ghostwritten tome — the biggest royal book since Harry’s mother Princess Diana collaborated with Andrew Morton for a 1992 biography — “calculated and despicable” and a work of “malice”.

Describing his decision to go public “idiotic”, Wilson said the book had merely succeeded in making the public sympathize with the royal family, “not with him”.

The book is the latest broadside from Harry and his American wife Meghan after they quit royal duties and moved to California in 2020.

The Duke and Duchess of Sussex, as they are formally known, have since cashed in on their royal connections with several lucrative contracts for tell-all books and programs.

The Spanish-language version of the book was hurriedly withdrawn from shelves after the blunder on Thursday but not before it had been purchased by media outlets, wrecking the publisher’s strict worldwide embargo.

The Sun tabloid said public sympathy for Harry over losing his mother as a child could not “justify the destructive, vengeful path he has chosen, throwing his own family under a bus for millions of dollars”.

In an editorial, it pointed to “countless discrepancies” in his claims and advised him to listen to friends who have urged him to “stop for his own good”.

The Guardian’s Gaby Hinsliff said the book had moved beyond issues of “awkward public interest” into the “washing of dirty linen” in public.

The US edition of the left-leaning newspaper was the first to publish a leaked extract of the book this week, in which Harry described his physical altercation with William.

“The details of the brothers’ alleged punch-up in a palace cottage are at once almost ridiculously trivial and heartbreakingly sad,” she wrote.

Harry’s claim to have killed 25 people in Afghanistan and likening his actions to removing “chess pieces” from a board, has been seen as boastful and inappropriate, and enraged some veterans.

Retired colonel Tim Collins, who led a British battalion in Iraq in 2003, condemned a “tragic money-making scam”, adding: “That’s not how you behave in the army. It’s not how we think.

“Harry has now turned against the other family, the military, that once embraced him, having trashed his birth family,” he added.

Senior Taliban official Anas Haqqani tweeted: “Mr Harry! The ones you killed were not chess pieces, they were humans; They had families who were waiting for their return.”

As the hashtag #ShutUpHarry began trending on Twitter, The Sun quoted sources close to his father, King Charles III, as saying he had been saddened by the book.

In fresh claims in the memoir reported by the Daily Telegraph late Friday, Harry alleges that his father wanted to avoid supporting him and Meghan financially because he was jealous of her.

The duke writes he realized Charles feared “a novel and resplendent” royal who would “dominate” the limelight after the now-king raised concerns about the monarchy supporting the couple monetarily after their 2018 wedding.

“He had experienced that before and he had no interest in letting it happen to him again,” Harry writes, referring to Diana, the Telegraph said.

Craig Prescott, a constitutional expert at Bangor University in north Wales, told AFP the “scale” and “ferocity” of the current royal rift was unprecedented but the royal family would probably “ride this out”.

But any moves to remove Harry and Meghan’s royal titles would require political intervention and new legislation.

The royals would likely regard that as “pouring fuel onto the fire” at a time when they wanted to focus on Charles’s looming coronation on May 6, he said.

Read Next
Another drug den dismantled in Cebu City—PDEA-7