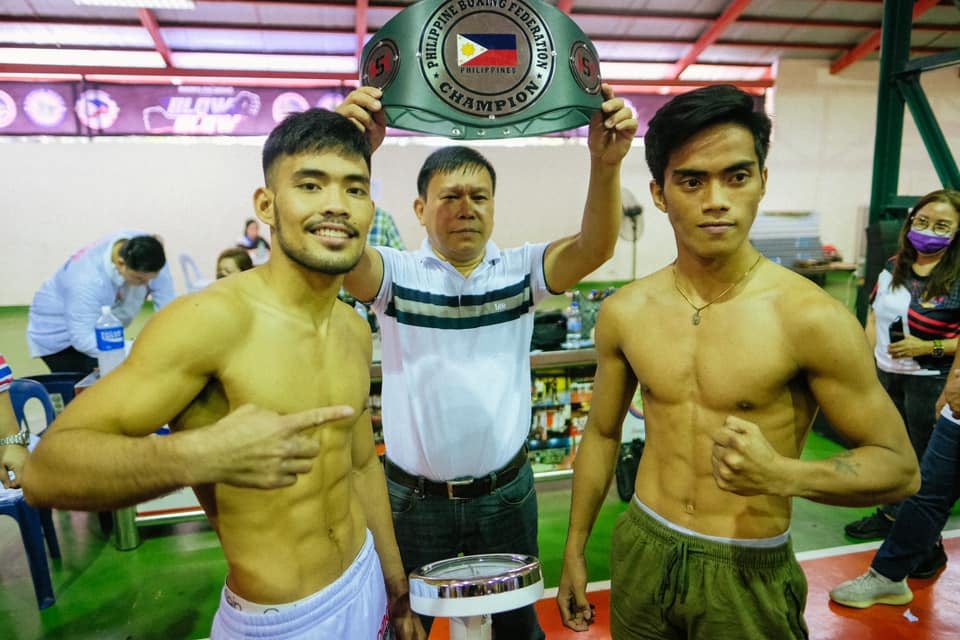 Benny “The Bull” Cañete (left) and his opponent Kenneth Llover (right) pose with the PBF belt after their weigh-in for their main event bout on Saturday. | Photo from the Omega Boxing Gym Facebook page.

Cañete weighed in at 116.5 pounds while Llover tipped the scales at 117lbs for their 10-rounder showdown for the Philippines Boxing Federation (PBF) bantamweight title currently being held by the latter.

The 22-year-old Cañete of Siquijor is one of Cebu-based Omega Boxing’s brightest prospects with an unbeaten record of seven wins with six knockouts.

He had an impressive outing in 2022, winning all of his three bouts in stoppages. He scored a technical knockout against John Kenan Villaflor in March last year, followed by a referee stoppage against Mark Glen Antaran in June, and a sensational fourth-round TKO against Jovanie Tagusi last October 29 in General Santos City.

However, Llover is no pushover, as the 20-year-old Cavite native has an unbeaten record of 7-0 (win-loss) with five knockouts.

Like Cañete, Llover had an impressive 2022. He also fought three times winning two by unanimous decision against Miller Alapormina in May and Ridick Tablanza in July in Makati City where he snatched the Philippines Luzon Professional Boxing Association bantamweight belt.

He wrapped up 2022 by winning the PBF bantamweight title with a second-round TKO against Jonathan Francisco in Paranaque City.

A total of 14 bouts will be featured in the explosive fight card.      /rcg