DPWH: Steel bridge for Sibonga up in one week

With the concrete Dumlog bridge cut off, people traveling through Sibonga town in south Cebu have to take a detour.

Bus passengers  get down and transfer to a habal-habal or motorcycle-for-hire that takes riders through a barangay road to the other side, where another bus waits to receive them.

The “dawat-dawat” system will continue until the Department of Public Works and Highways (DPWH) 7 makes good its promise of installing a temporary steel bridge, which would take at least  a week.

Other commuters go down to the Simala riverbed and walk across a long plank of laid out as a  a footbridge over the water.  Enterprising  residents charge P5 per use.

Typhoon Seniang’s torrential rains caused the river to overflow on Dec. 30, scouring the riverbank.  The soil holding up the south road approach of the Dumlog bridge collapsed, leaving it impassable.

Travel to and from southern Cebu was slow moving yesterday with the damaged bridge that connects to neighboring Argao town.

Engr. Ador Canlas, DPWH regional director of  Central Visayas, said the public will have to bear with the inconvenience until a prefabricated steel bridge is set up.

Work is expected to start on Friday and take at least one week.

But since Jan. 1 is a holiday, they had difficulty booking a flight and will arrive on Jan. 2.

“When they come, they will have to assess the Dumlog bridge and facilitate the installation of the prefabricated bridge,” said Engr. Nicomedes Leonor, head of the 2nd engineering district.

A prefabricated steel bridge will be bolted to the damaged link. This is  the same type used in earthquake-affected areas in Bohol province and typhoon-hit parts of Mindanao.Central Visayas has suppliers.

In Malabuyoc town, the damaged Saliring bridge was reopened to light traffic only on Tuesday afternoon.  Its road approach was earlier scoured by typhoon Queenie, and more severely affected by flooding caused by Seniang.

Records from the Office of the Civil Defense (OCD) show that  15 deaths were reported in Cebu while three others came from neighboring Bohol province.

About 5,000 families in southern Cebu and 537 families in Bohol were evacuated before or during the storm.

Of the Cebu deaths, 13 came from Ronda town and one from Alegria. A fisherman was killed in San Francisco, Camotes island and a dead child was found in Moalboal town.

All 15 victims died from drowning after they were washed in flash floods caused by heavy raining brought by Seniang.

A 13th casualty from Ronda was found yesterday morning.

The body of Leoning Caday, 50, was found near the dike in barangay Ilaya. Two remain missing – Joyce Bahinting, 3 and 1-month-old baby Ace Bahinting. 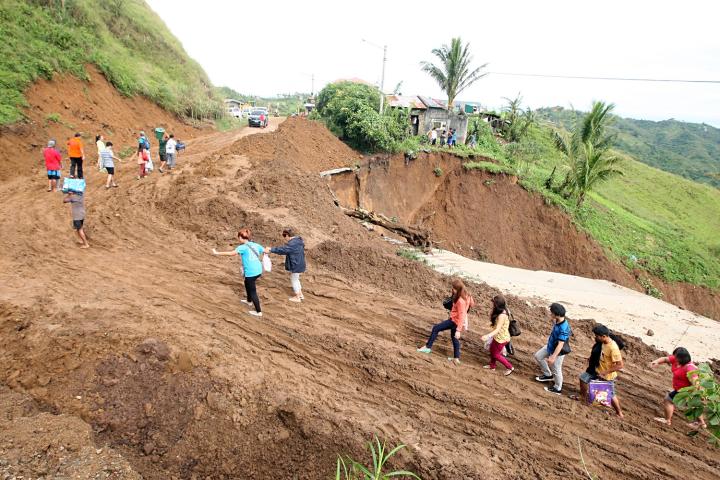 The Ronda Municipal Council declared a state of calamity during a special session on Tuesday.

The Cebu provincial government sent 5,000 food packs of rice, sardines and noodles and 20 sacks of rice.

“All of us are victims.  Nobody was spared by the typhoon,” he said.

Most parts of Ronda town were submerged in at least waist-deep floodwater when Seniang hit Tuesday dawn.

The mayor earlier said it was the “worst flooding” seen in 30 years and that water rushed down from the mountains, “as  if it was making its own path”.

Canlas said DPWH set up a command center at their regional office in the South Road Properties (SRP) to coordinate field work.

Engineers were sent to assess the collapsed portion of the Transcentral Highway in barangay Gaas, Balamban town.

“They saw underground seepage because part of the land collapsed,” Canlas said in a phone interview.

Motorists using the highway will have to use only one lane on the left-side for now, until repair is done on the damaged portion of the national highway.

Signs are installed to guide motorists of the hazardous portion and DPWH personnel are there on a 24-hour basis, he said.

“I want use of the road controlled.  Only one lane is passable.   At least the highway is accessible for now,” Canlas said.

In Bohol province, the Anislag Bridge in Maribujoc town was set for re-opening late yesterday.

The concrete bridge in Anislag and three other steel bridges which include those in Kamayaan and Abatan were reopened on Tuesday afternoon assessment by DPWH engineers.