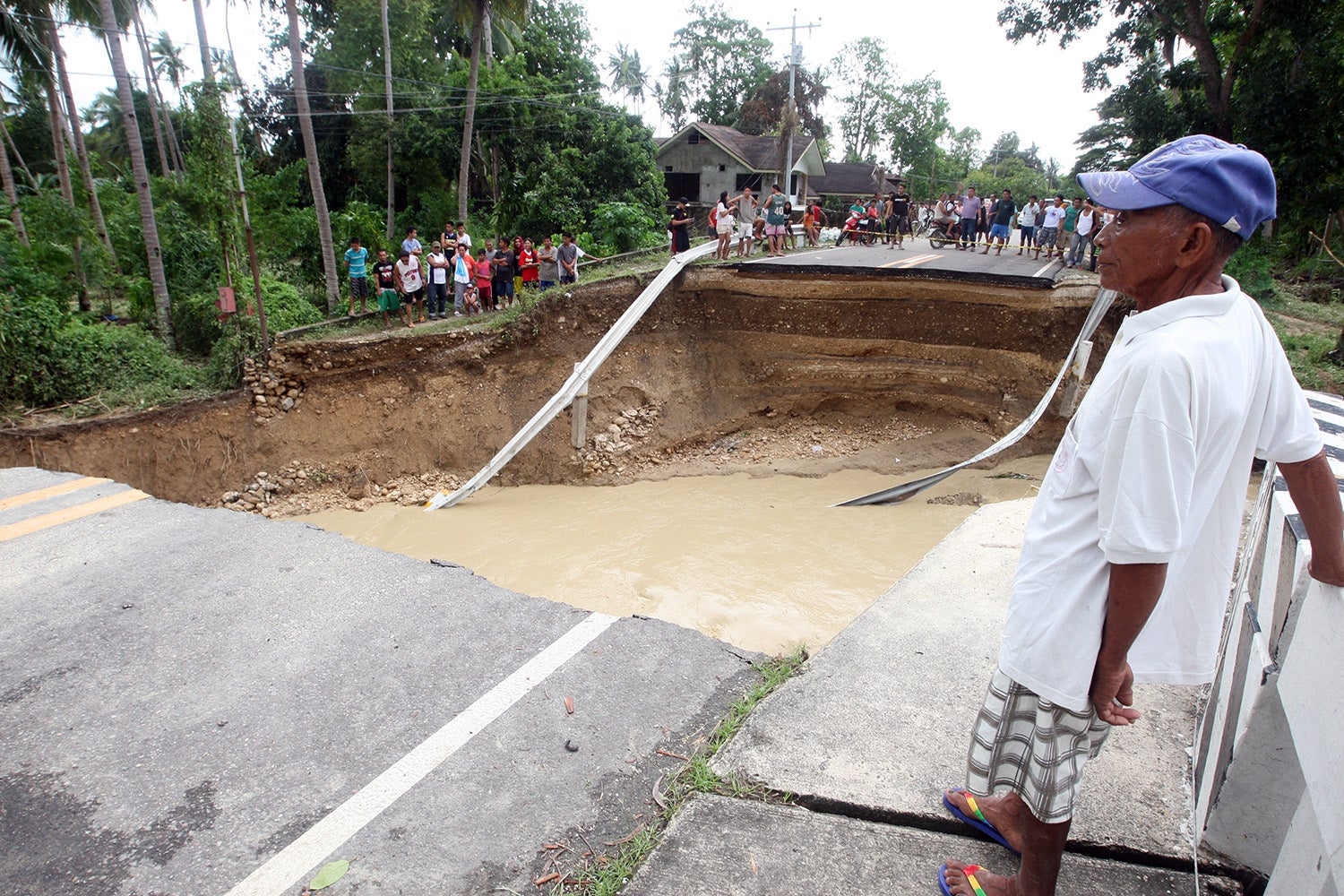 The approach to the Dumlog bridge in Sibonga town collapses after a flashflood brought by typhoon Seniang. (CDN PHOTO/ TONEE DESPOJO)

At dawn, muddy water swept through Ronda town, south Cebu, killing at least 12 people in the worst flooding seen there in 30 years, triggered by torrential  rains of typhoon Seniang.

“Nagsyagit ang mg bata…nangayo ug tabang… pero ngitngit kayo…kusog ang tubig. Wa miy nabuhat  (The children were shouting for  help. But it was too dark and the water current was strong. We couldn’t do anything),”said 56-year-old Magdalena Batomalaque.

Pausing in between sobs, the grandmother recalled how she and her family were overwhelmed by floodwater that reached chest deep and wiped out their house in barangay Liboo.

She lost her husband, mother and two grandchildren. 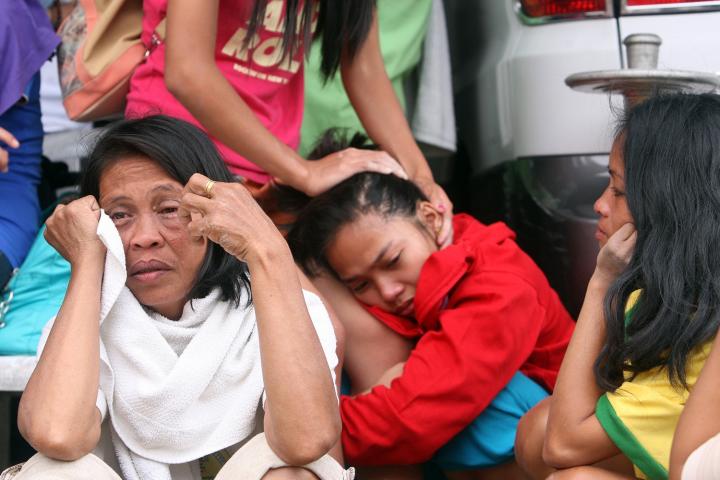 The Bajinting family of barangay Tupas in Ronda weep over the death of four members and worry about 3-year-old Joyce, who is still missing. (CDN PHOTO/ TONEE DESPOJO)

Across Cebu province, 15 deaths were reported by officials, mostly in south Cebu with Ronda town registering the most casualties.

Flooding and landslides were reported in Balamban town, where part of the Transcentral Highway near the Adventure Cafe caved in. Toledo City and  six other towns also struggled with flashfloods.

Two landslides were reported in the mountain barangay of Sinsin, Cebu City. 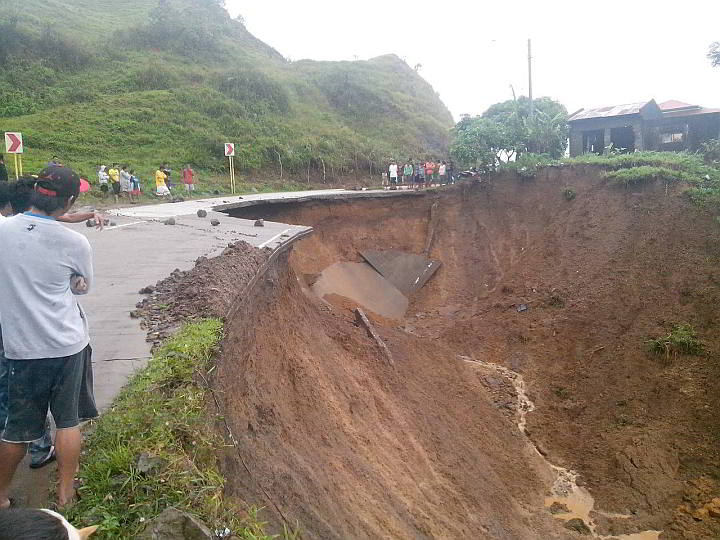 UNPASSABLE. A landslide eats up a portion of the Transcentral Highway near the Adventure Cafe in Balamban town. (FACEBOOK GRAB)

All storm warning signals in Cebu were lifted at 5 p.m. yesterday.

Seniang is forecast to be 110 kilometers west of Puerto Princesa in Palawan this afternoon, after dumping intense rain in south Cebu.

Cebu’s biggest infrastructure damage may be in Sibonga town, where the  approach of the Dumlog Bridge in barangay Simala was washed out.

The bridge remains impassable. A large gaping hole exists between the edge of the concrete national bridge, and the other side of the road.

The force of water overflowing from the Simala river scoured the sides of the river bank, eroding soil supporting the bridge approach and causing its collapse.

The broken link cuts off travel from south Cebu. Commuters were forced to to take a tricycle or motorcycle-for-hire through a barangay road as a longer, alternate route to get to the other side. 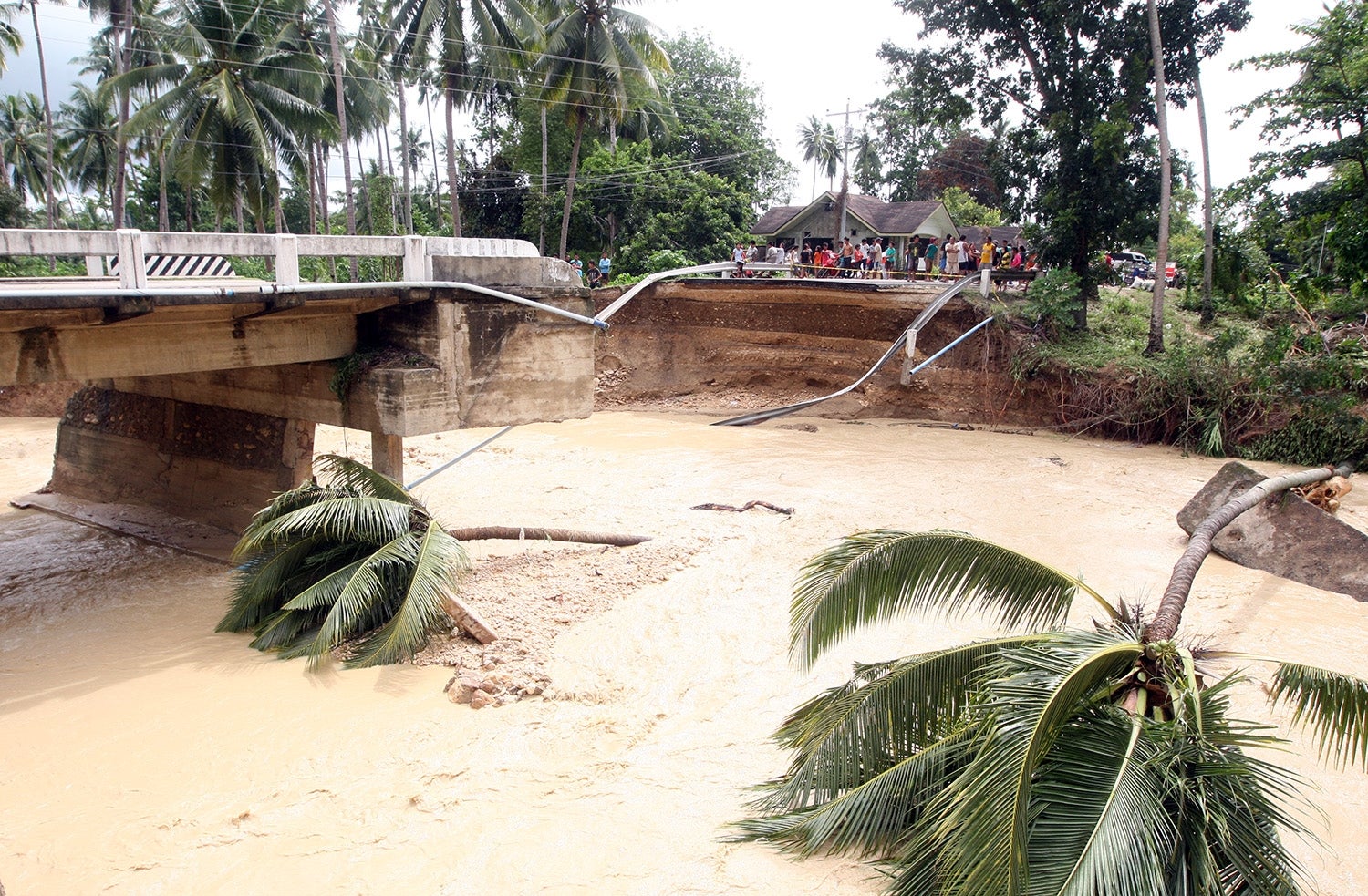 She said she heard a loud sound like an explosion. Then came the raging floodwater.

They tried to stay together, clinging to anything afloat but the water rose too fast and the current was strong.

Batomalaque said she got swept away twice when she tried to hang on bamboo branches.  She was saved by her hold on  to a coconut tree.

She lost her 58-year-old husband Bienvenido, her 89-year-old mother Prudencia Tampos and  grandchildren, Rancess, 5, and Aaron, 7.

She said little Rancess was still alive when the girl was found in a culvert in the boundary of Alcantara and Ronda towns.  But she was vomiting mud.

Rescuers tried to bring the girl to the hospital. The police car they were riding couldn’t pass the bridge in Alcantara, which was damaged.

Rancess died along the way.

Their house of mixed light and concrete materials sat a few meters from the Talaba river.

Ronda Mayor Mariano Blanco III said barangays Tupas and Liboo were the worst hit of the town’s 14 barangays.
Blanco said the water that flooded the town came from barangay Tupas which is situated in between valleys.

“The water didn’t go to the river. It flowed into the roads. Wa mikasabot kay murag naghimo syag iyang agianan,” said Blanco, who described it as the worst flooding seen in Ronda in 30 years.

(We don’t understand.  It’s as if the water was finding it’s own path.)

Forced evacuations were ordered on Monday afternoon. However, some residents refused to leave their homes.

(Maybe they were not interested to evacuate because in the previous storms, nothing bad had happened.)

Rescue efforts were launched but the water was already too high.

For the victims, the town will provide burial aid. The province promised to donate 20 sacks of rice.“We will assess what other assistance we could give,” said Blanco.

There were initial reports of major livestock and farm damage.

In barangay Tupas, spouses Evelyn and Junaldo  Bahenting were killed along with  their children Joan, 8, Juvelyn, 10, and Jean.

Yap was one of those rescued at the height of the flooding, said the mayor.

When the truck carrying rescued residents tilted, Yap panicked and got off.  She was swept away by the strong current. A certain Pew-pew died in barangay Ilaya.

At least 10 families were rescued.

There would have been more deaths if the flooding occurred during high tide, said councilwoman Anabelle Hambelton.

Read Next
7 towns, Toledo city hit; Calamity to be declared