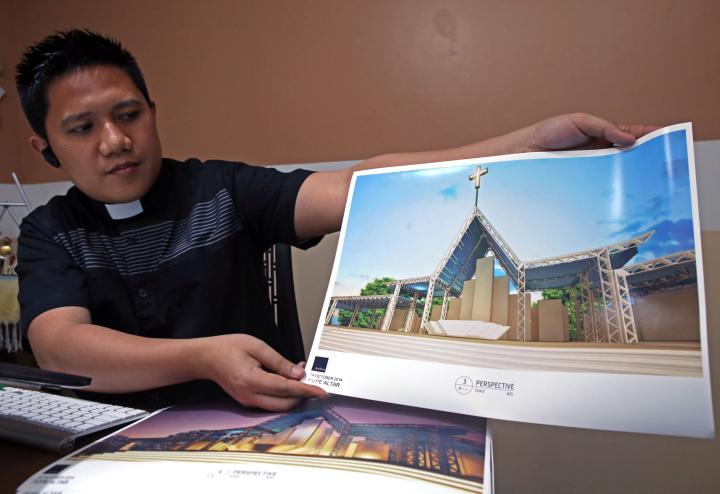 Design of the templete for the Holy Mass at the airport. (CDN PHOTO/ LITO TECSON)

The templete or small temple for the Mass of Pope Francis in Tacloban City will resemble  a bahay kubo (nipa hut) which showcases the Filipino’s simplicity.

“We want to portray the strong Filipino character without being extravagant,” said architect Dan Lichauco, who was commissioned to design the templete that will soar over the altar where the papal Mass will be held on Saturday this week.

The stage which stands 40 feet tall and 30 x 12 meters wide at the Tacloban city airport is financed by the government and  built by the Department of Public Works and Highways (DPWH).  It was set up last January 14.

Lichauco said local materials such as sawali or split bamboo mats will be used for the templete. A choir stage was also set up to accommodate 250 persons and an orchestra.

Fr. Chris Arthur Militante, information and social communications officer of the  Archdiocese of Palo, said they earlier prepared a grandiose design of the templete when Pope Francis confirmed that he will go to Tacloban City.

“But we were told by the Vatican that it would entail huge expenses. What Pope Francis wants is simple. So we changed it until the third one was approved,” Militante said.

Pope Francis will arrive at the Tacloban City airport at 9:30 a.m. on Feb. 17 to preside over the Mass at 10 a.m. Fr. Militante said the Mass will last for about an hour and a half.

“The Tacloban airport shall be opened to the public by 2 a.m. Saturday. And three hours before the Mass, there will be no movement already. (People) have to be ready. Although it won’t  be easy, it will be a spiritual journey for us,” he said.