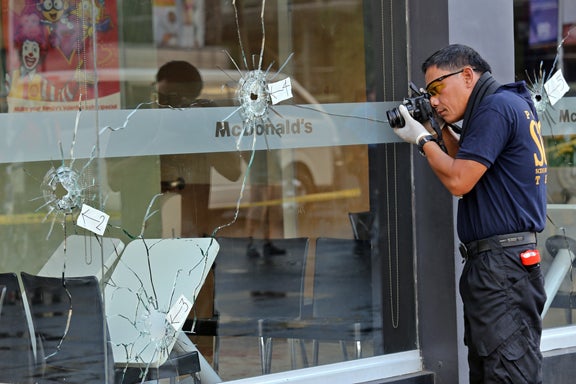 SHATTERED. A forensics technician marks and documents the bullet holes in the glass panel of the McDonald’s outlet in barangay Tabunok in Talisay City. CDN PHOTO/JUNJIE MENDOZA

A German engineer,  who frequently visited the country to do volunteer work,   was fatally shot at dawn yesterday inside a fast-food outlet  in Talisay City  after  an argument broke out involving customers in the next table.

Henry Haffner, 31, ran to the second floor when three men with guns arrived and started shooting.

Haffner  was mistaken for  another foreigner who had tangled earlier with the assailants.

His Filipina girlfriend was able to run to safety in the kitchen.

Haffner died from multiple gunshot wounds while being treated in Chong Hua Hospital in Cebu City, where he was transferred after being rushed to the Talisay District Hospital.

Police said the real targets of the shooting were a  Frenchman and an Indian, both residents of the city, who got into  an argument with two  local men.

Julian Millard was shot in the arm and foot. Cheten Sapraiya, an Indian national,  was wounded in the nape.  Both men who are married to Filipinas are in stable condition at the Vicente Sotto Memorial Medical Center.

The two foreigners were  eating with a Filipina companion at the McDonald’s restaturant in Tabunok about 4:20 a.m.  when two unidentified men arrived and started taunting them, said SPO1 Mike Espina, homicide investigator.

The derrogatory words refer to the stereotype image of Indian nationals as money lenders.

Saparaiya, who understood what they meant, was slighted.  He and Millard confronted them.  Heated words were exchanged.

The two local men hurriedly left after the restaurant’s security guard came over and intervened.

Haffner and his girlfriend, Sheila Jane Gimutao of  Zamboanga ,were at the next table having hot chocolate.

The couple was ready to leave the restaurant  when the assailants returned with two other men. This time, three of them were armed.

Saparaiya and Millard were also about to step out, but ran back inside when they saw the armed men.

Haffner rushed to the restaurant’s second floor, but he was chased and shot down.

Gimutao told Cebu Daily News that her boyfriend and the French victim were both wearing white shirts and a Fedora hat.

The assailants boarded a motorcycle and sped off.

Police later recovered at least 16 empty 9mm shells and another 5 empty .45 cal. shells from as well as 11 deformed slugs from the two guns.

SPO1 Espina said they were looking into the possibility that the assailants and two foreigners knew each other prior to the shooting incident.

Police have asked the  restaurant management for a copy of the closed-circuit television footage inside and outside the establishment to identify the gunmen.

Talisay City Mayor Johnny delos Reyes, in a statement, said he was “very much saddened” by the “brutal shooting” and  called on the police to catch the perpetrators and intensify patrols.

Cynthia Barrit, acting public information officer of the Talisay City government, echoed the appeal for business establishments whose CCTV cameras may have recorded the images of the suspects to cooperate in the investigation.

The German consulate in Cebu has offered to help Haffner’s family, the victim’s girlfriend said.

“I hope our authorities can give justice to him. Let us not wait for the foreign government to work for it,” Gimutao said. /Correspondents Jhunnex Napallacan, Carine M. Asutilla, Chito O. Aragon, Gabriel G. Bonjoc, Michelle Joy L. Padayhag and Victor Anthony V. Silva

Read Next
Helping others kept him going