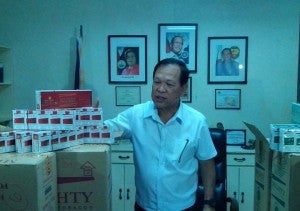 Eleven boxes of fake cigarettes sold in barangays Taboan and Ermita in Cebu City were confiscated by agents of the National Bureau of Investigation (NBI-7).

The three were charged with violation of Republic Act 8293 or the Trademark Infringement and Unfair Competition law for selling fake Mighty cigarettes.

The case was filed before Branch 11 of the Cebu City Regional Trial court. RTC Judge Ramon Daomilaas recommended P40,000 bail for each suspect.

NBI-7 acted based on a complaint filed by Mighty Corp. manufacturer of Mighty cigarette brands.

Read Next
Ampatuan out on bail