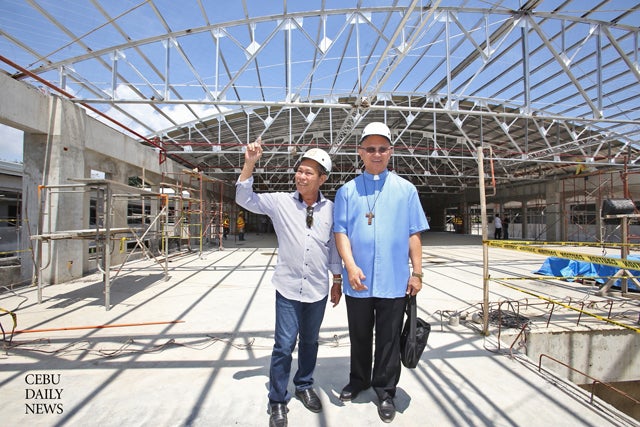 Cebu Archbishop Jose Palma (right) is shown a future chapel location in the Pavilion project site by Rafaelito A. Berino, chairman of Duros Development Corp. The builder is donating the structure to the Cebu Archdiocese for use as venue of the 51st International Eucharistic Congress in January 2016. In return, Duros was given the right to use part of the Mabolo seminary property for 25 years. CDN PHOTO/JUNJIE MENDOZA

Construction of the pavilion for the 51st International Eucharistic Congress (IEC) that will be held in Cebu City in January 2016 is halfway complete.

When  the religious congress is over, the building will be used as a   pastoral center and a new minor seminary for the Archdiocese of Cebu.

With its wide dimensions, it would also serve as the “biggest evacuation center” in Cebu island, said Msgr.  Dennis Villarojo, IEC secretary general.

Cebu Archbishop Jose Palma and other IEC organizers yesterday walked through the project site behind the archdiocesan seminary grounds in barangay Mabolo to inspect what would  be a new landmark in Cebu City.

“I was a bit anxious in the past but when I saw the development in the  Pavilion, I’m now very excited about the forthcoming event. From all angles, people know that we are prepared,” he said in a press conference at the St. John Paul II Home for Priests.

Palma echoed what Archbishop Piero Marini, president of the IEC, said about the forthcoming religious congress: “Cebu is making a miracle, beyond human effort.”

“Today is Friday the 13th. But this is a lucky day for me after I saw the progress of the construction of the Pavilion. We will show the world that Cebu is special and blessed by the Lord,” said Palma.

The cost of building  the pavilion is being fully shouldered by the contractor Duros Development Construction (DDC).

Under a  memorandum of agreement with the Archdiocese of Cebu, the construction company pledged to donate the entire pavilion.

In exchange,  the Archdiocese of Cebu will give DDC usufruct rights over  part of  the seminary property for  25 years.

Of the estimated P550 million  cost of the pavilion,  P11.9 million went to the demolition and transfer of several existing structures needed by the seminaries.

“All these will be assumed by DDC, thus funds raised for the IEC will be spent for operational expenses of the event and not for the Pavilion,” Villarojo explained.

The facility has two parts: the plenary hall and the secretariat building.

At the end of the congress,  the pavilion will be transformed into two separate structures. The plenary hall will be used as a  pastoral center while the secretariat building will become the new minor seminary.

The pavilion will serve as a venue for religious gatherings and can function as an evacuation center in times of emergencies.

Villarojo said operational expenses for the IEC, estimated at P250 million, would be funded by  registration fees of delegates, donations in the nationwide Piso Para sa Misa ng Mundo campaign, and sponsorships.

“Money is not a problem because we are getting the necessary support,” Archbishop Palma said.

Palma added that  they were  not worried about sourcing  funds for operational expenses of the congress since all Catholic churches in the Philippines are helping the Cebu Archdiocese.

Asked if politicians can  donate for the IEC, Palma said, “we welcome all donations but without any strings attached.”

“If you donate something for the IEC, don’t expect to get a special chair during the event or  special privileges  just because you donated something,” he said.

Palma said two invitations—one from the Catholic Bishops’ Conference of the Philippines and another from Archbishop Emeritus Ricardo Cardinal Vidal—were sent to the Vatican, asking Pope Francis to attend the event.

But until now, the Holy Father has not responded to the twin invitations.

“Is the pope coming? Only the pope can answer. Maybe, there will be a response when Archbishop Marini  comes  to Cebu this April,” Palma said.

Read Next
Balili estate lawyer: Keep me out, I didn’t receive a centavo