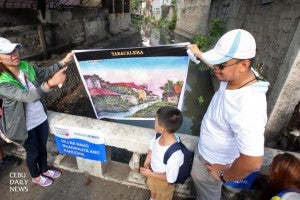 RESTORE THE RIVER. Volunteers show a photograph of the old Tabaclera creek to dramatize their appeal for public support on its restoration in a campaign dubbed as “Siyagit sa Sapa’. (CDN PHOTO/ TONEE DESPOJO)

About a hundred people joined the 2.6-kilometer bike ride and walk for the “Siyagit sa Sapa,” an advocacy to raise awareness on the state of Cebu City’s rivers yesterday.

The activity spearheaded by the Movement for a Livable Cebu (MLC) covered the five bridges over the historic Estero de Parian.

The first bridge was along the D. Jakosalem Street next to Gaisano Main Building.  Participants from 36 organizations then started to put up the mini banners while Jessie Baring, MLC’s pointman for the campaign delivered a message.

“Before it is called as Estero Parian but today it is called canal de Parian. Look at that river. Full of trash, listen to it,” Baring told the participants.

Baring recalled that it was two years ago that he wanted to raise awareness on the abused rivers. He was looking for the right activity to catch the attention of the public and focus  attention to the rivers.

“They (rivers) are voiceless so we speak in their behalf,” he added.

At the third bridge – the Logarta Bridge, they put up mini banners and Baring read a poem “Sapa Sa Mahiga.” Baring said the bridge once played host to   fireflies, now only the stench of untreated sewage makes it infamous.

Fourth stop was at Zulueta bridge – considered one of the oldest Spanish stone bridges in Cebu City and built using coral stones.

It was one of the deepest rivers before and was lined with palm trees but now  it has  turned into a canal, Alix said.

The last was at the Tabacalera bridge where before  the shore had soothing greenery  but now garbage is its place.

Marc Canton, MLC convenor said that downstream the fifth bridge is the Guadalupe River bridge where the planned 3rd bridge between Cebu City and Mactan Island is proposed to start.