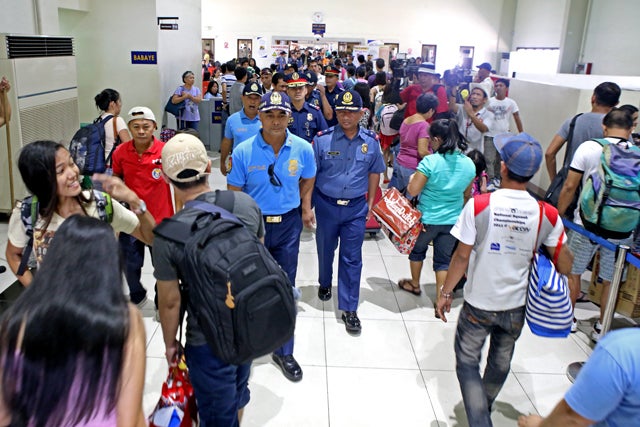 AFTER being a chance passenger in last year’s Holy Week vacation, May Galbo decided to leave home early.

Galbo flew with her family from Davao and arrived in Cebu at 10 a.m. yesterday for a 1 p.m. Supercat boat trip to Bohol.

“Everything was smooth. I bought a ticket at Pier 1 unlike before so it’s good to plan ahead,” she said.

Chief Insp. Felix Quianzon, officer-in-charge for port security said passengers leaving for their hometowns should arrive at the port two to three hours ahead of schedule.

“Some of them arrive 30 minutes before departure time. They should arrive ahead of time so that they can buy tickets and get on board earlier,” he said.

Passengers were also advised not to carry too much baggage to avoid the inconvenience of long security checks.

About 10 to 20 baggages were unclaimed at the Cebu port area since March 25,

Cebu Gov. Hilario Davide III said he inspected the Cebu South Bus Terminal and asked the riding public to cooperate with management and abide with the rules in boarding their buses.

Six tents were placed near the terminal’s third entrance to serve as temporary waiting area while portalets were placed for the convenience of passengers.

The CSBT recorded 8,000 passengers boarding their buses since dawn yesterday.

The CSBT expects more than 10,000 passengers to go home today. There is also a special trip to Zamboanga City at 2 p.m., Dumayac told reporters.

Two Suroy-Suroy buses from Moalboal and Toledo City are on standby.

Passengers who dump leftover food at the terminal will be fined P500, Dumayac said.

In a statement, Tigerair Philippines said flights DG 7014/7015 Manila-Cebu-Manila were canceled due to a technical problem on the assigned aircraft.

The airline company informed their affected passengers that Cebu Pacific arranged additional flights to re-accommodate them.

Passengers may also rebook their flights for travel within 30 days from original departure date or opt for full refund or travel fund without penalties.

“They also notified us of the planned delays like Airasia Zest flights Z2 131 for Cebu-Kota Kinabalu and Z2 525 Cebu-Davao. The delays are however very minimal,” Plunket said.

Plunket said they expect the same high volume of passenger traffic this week.

“The check in counters and bigger space in the x-ray area allowed us to accommodate a larger number of passengers without actually seeing congestion or long lines. The passenger processing time is also quick and we have already placed more seats for the passengers to wait comfortably for their flights,” she said.

Read Next
Communing with the poor