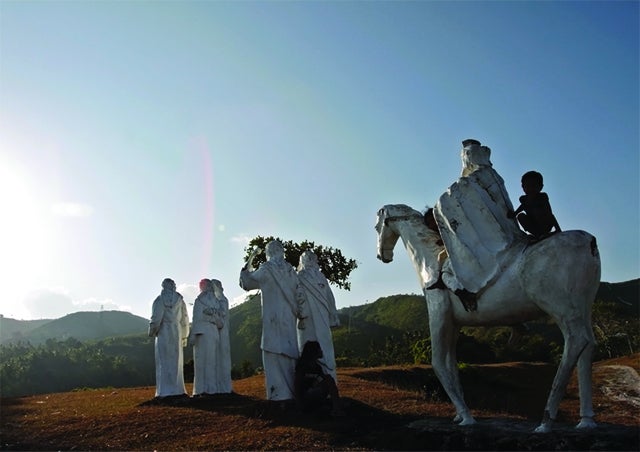 Children play amid the life-size statues in the Tanchan Celestial Garden in Banawa, Cebu City where many faithful go to pray the Stations of the Cross as the Holy Week enters its most solemn days. Here images of Mary of Magdalene and disciples walk while a Roman soldier rides a horse to the Tenth Station. CDN PHOTO/JUNJIE MENDOZA

Disaster officials in Cebu will have skeleton staff, volunteers  and heavy equipment standing by as typhoon Chedeng (international name Maysak) makes landfall in Luzon over the weekend.

The cyclone will enter the Philippine area of responsibility by dawn today.

“We are already preparing. We should not be complacent,” Cebu City Councilor Dave Tumulak told reporters yesterday.

Weather forecasts will be more specific and 70 percent accurate once the storm enters the country, said Tumulak, who heads the Cebu City Disaster Risk Reduction and Management Council.

He advised city residents to stock up on food, water and medicine because many supermarkets and stores are closed on Maundy Thursday and Good Friday.

The approaching typhoon has threatened summer holiday plans with  a large number of Filipinos traveling to home provinces and resorts for the Holy Week break  starting yesterday.

The typhoon has moved into the open sea and is expected to significantly weaken before reaching the Philippines,  said weathermen.

Chedeng’s sustained winds weakened on Wednesday from 215 kph   to 190 kph and could still weaken further as it approaches the eastern coast, Pagasa said.

The cyclone was packing winds of 160 kilometers per hour when it passed north of islands of  Micronesia early Wednesday.

Chedeng is expected to make landfall  on Saturday night or Easter Sunday in northern and eastern Luzon.

It said the northeast monsoon or Amihan, which brought cold weather from October to February, has ended.  Despite the onset of the dry season, the country would still experience some rain showers and thunderstorms due to the urban heat island effect or wind convergence.

In case there are evacuees, more than 30,000 family food packs are ready  for distribution at the Cebu International Convention Center (CICC) and Petroni Warehouse, said the Department of Social Welfare and Development.

Each pack is sufficient for two to three days  with six kilos of rice, eight canned goods (four meat and four fish), eight sachets of coffee and eight packs of noodles.

Trucks and other vehicles are also being arranged and nearly  P1 million  fund has been set aside to buy extra food packs if needed.

At the Capitol, Baltazar Tribunalo, head of the Cebu provincial disaster office,  said a skeletal force is in place to monitor and provide assistance.

He said they will distribute  satellite phones to all towns and cities  today or tomorrow.

In Lapu-Lapu City, Andy Berame, local disaster officer, said schools and gyms were ready as evacuation centers. Food stocks were prepared for the 11 barangays in nearby Olango Island.

In Mandaue City,  Felix Suico, head of the local disaster office, said  14 vehicles were standing by for emergency rescue and relief operations.

The Mandaue Contractors Association offered their warehouses as evacuation centers.

Read Next
Deeper look at the Pasos of Bantayan