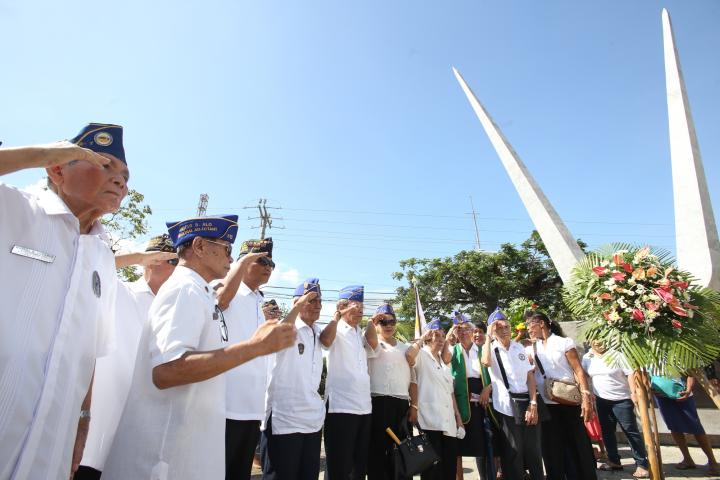 In remembering soldiers  who died  for the country  in the 1942 Fall of Bataan, an 87-year-old war veteran in Cebu city said the day’s honor extends to the 44 Special Action Force commandos who were killed last January in Mamasapano.

“In English, Araw ng Kagitingan is translated as Day of Valor. Valor means great courage in the face of danger. I included in my speech not only the soldiers of Bataan but all soldiers who showed valor,” said Lt. Angelo D. Alo,  District Commander of the 2nd Cebu City Veterans District.

He said the day’s recognition extends to  the  sacrifice of other modern-day heroes, such as  men and women of the police force.

Flowers, speeches and the salutes of  surviving war veterans were offered yesterday morning at the Cebu Veterans Memorial Monument in Plaza Independencia in Cebu City.

Cebu City   Vice Mayor Edgardo Labella said it is  important to remember the past because it was through the sacrifice of  brave soldiers during World War II that Filipinos enjoy freedom  today.

“It is my fervent hope that our heroes have not died  in vain,” he said, adding that the battles fought today are in the political and economic arena.

He challenged people to unite against corruption and injustice.

Labella attended the rites instead of  Mayor Michael Rama who flew to Seoul, South Korea for an official trip. (See related story.)

The guest of honor was  Shigeyuki Hirakawa, Counselor of the Embassy of Japan in the Philippines.

In Mandaue City, Mayor Jonas Cortes and local  officials held a short program and laid down a floral offering at  6 a.m. at City  Hall.

“We can also be modern heroes by just doing our  duties religiously and doing the right thing regardless of the consequences,” Cortes said.

He cited as an example the 44 fallen SAF commandos, and  NGOs and volunteers who helped  survivors of the 2013 supertyphoon Yolanda, groups that initiated scholarships for the poor  and a teacher’s dedication in promoting quality education.