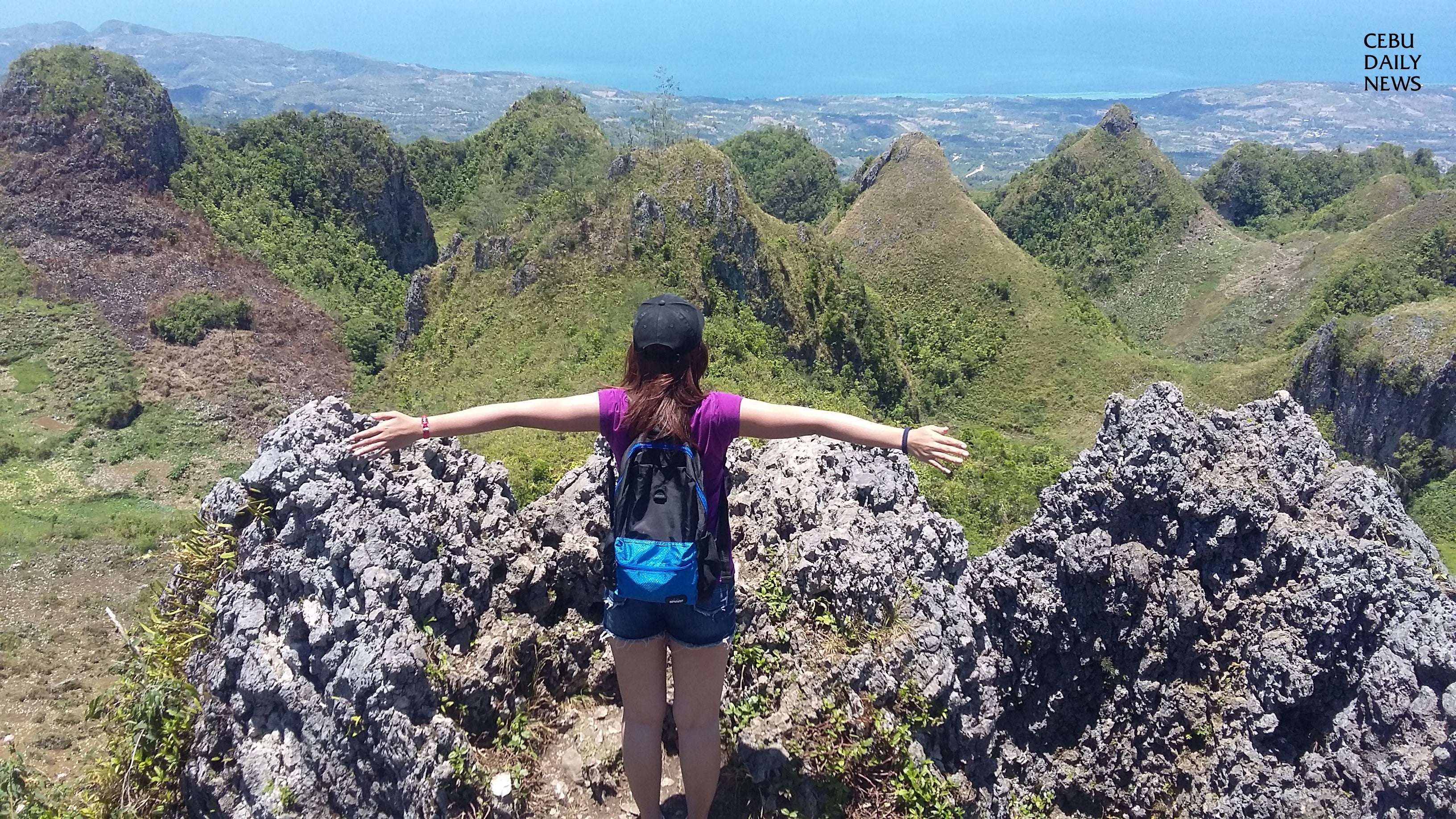 After more than an hour climb, one can enjoy the breeze on top despite the scorching heat in noontime. (CDN PHOTP/APPLE MAE TA-AS)

It’s a nearly two hour trip from Cebu City to Osmeña Peak, the highest mountain in Cebu that is a favorite among hikers for its picturesque view of the countryside.

Most known as O’ Peak, it offers a breathtaking view of the sunrise,  sunset and the white coastline hugging the coral blue sea and  jagged hills with  lush grass and patches of flowers.

Osmena Peak rises 1,013 meters above sea level and is nestled between the southern towns of Dalaguete and Badian.

It straddles the Mantalongon range in the southwest and offers a 360 degree view of nature, including the islands of Bohol and Negros.

Dalaguete town located 80 kilometers away from Cebu City  is known as the vegetable basket and summer capital of Cebu with its cool air and elevation.

Most trekkers take the route from the town’s junction heading to Mantalongon market which takes 30 to 45 minutes.

To get there, one can ride a bus going to Santander or Argao town at the South Bus Terminal for P140 roundtrip. One can ask the driver to be dropped of at the Dalaguete junction.

From there,  rent a motorcycle to barangay Mantalongon or at the foot of the mountain for P250 to P300 per person.

Local children  work part time as tour guides and can lead you to the peak for P50 to P100.

If you plan a day-hike just like I did, wear long sleeves  since the temperature can suddenly drop as you climb up.

Use sunblock to protect you from the heat and bring drinking water.

Unpaved
A picnic meal is best  eaten at the peak  itself with an unspoiled view of nature as a reward after  a long and hard climb.

At the foot of the mountain, you need to log your   name before starting the one and a half hour climb.

For those who didn’t bring water and food, a store sells refreshments in the area. What I did was  start the trek from the barangay hall of Mantalongon.

I asked my guide to bring me to the unpaved road heading to the top,  passing through vegetable farms, a fish pond and an empty water tank.

Extra income
My guides were 10-year-old Jincent Caritan and nine-year-old Kent Pueblo, who will be Grade 5 and 4 respectively  this school year.

As we climbed to the top, Caritan and Pueblo told me about their lives as  sons of farmers who help till the land.

They said the extra income as tour guides was too good for them to pass up. Both dream of becoming engineers someday.

“It will be very nice to build tall buildings, for sure my salary would shoot up,” Pueblo said.

Locals carrying baskets of produce on their backs take time to greet trekkers.

As I reached the top at noon, I was rewarded with a cool breeze and the sight of unique rock formations.

Dennis Calzon, the 39-year-old caretaker of the peak, is used to accommodating reqeusts of trekkers to take their photos.

He said the influx of viistors  also meant an increase of  trash  mostly  food packs carelessly left behind.

Going down, one can take an alternative route  to Badian town where Kawasan Falls is located.

I used the same route heading back and dropped by  Casay Beach Resort where the entrance fee is P20.

The getaway to the mountain and the sea was worth it.

Read Next
Cops in force for today’s Traslacion