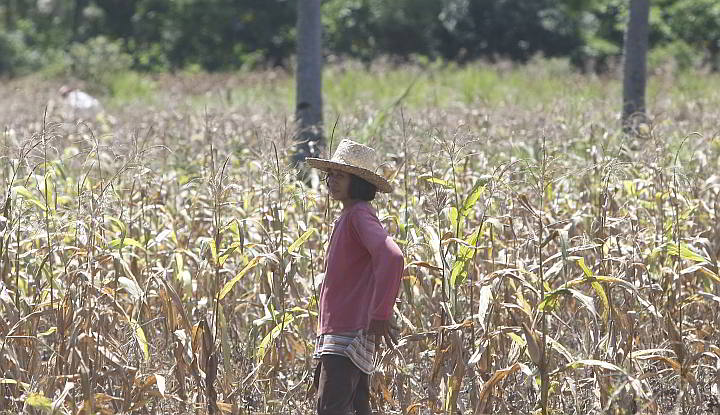 A farmer tends to her corn crops in a town in Cebu province in this 2008 file photo.
(CDN FILE)

The dry spell damaged 174.67 hectares of crops in at least four Cebu towns and cities.

Dr. Roldan Saragena said the El Niño phenomenon has affected the towns of Samboan and Sibonga and the cities of Talisay and Carcar.

Saragena said the crop damage has already affected 519 farmers in these towns and cities.

The r eports also showed that 43.18 hectares of fish ponds were damaged, affecting 186 fishermen. In Talisay City, 99 percent of the fish in fishponds have died.

Saragena said there are still 44 towns and 5 cities out of the 46 towns and 7 cities in the province that have not yet submitted their damage reports.

He called on the Municipal Agricultural Offices (MAOs) in these towns to submit their reports as soon as possible.

“For us here in the province, we need to consolidate the damage on crops or fisheries by the El Niño phenomenon. This is also needed as basis for possible assistance or support (that the province can give the affected towns or cities),” he said in Cebuano.

Meanwhile, Victoria Verano, MAO officer of Tuburan town, told Cebu Daily News in a  separate interview that they have not yet submitted their damage report because they were not yet done with their assessment.

Verano said the initial assessments in the town showed that at least 1,179 hectares of corn, 30 hectares of sugarcane and 5 hectares of rice were damaged.

Saragena, however, said that they have not yet estimated the costs of the damage to crops because the assessment for the whole province was still ongoing.

Two teams from his office, Team A assigned in north Cebu and Team B in south Cebu, are still collecting damage data brought about by the below normal rainfall.

Assistance
Barangays are encouraged to identify local damage and loss so that they can be given the appropriate assistance, said Baltazar Tribunalo, head of the Provincial Disaster Reduction and Management Office (PDRRMO).

Tribunalo said the barangays have their own quick response fund.

Saragena said the financial aid of the province to the affected farmers is different from the assistance given by the Philippine Crop Insurance Corp.