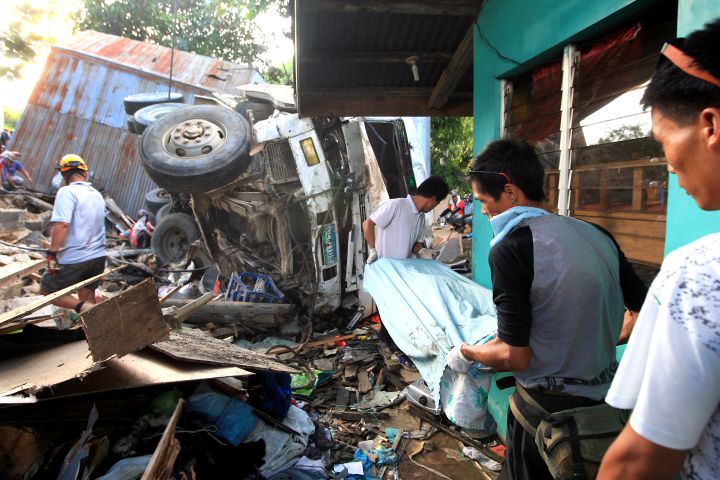 Workers of the Carmen Copper Corp. recover the remains of Messy Alisoso from under the 10-wheeler truck that plowed through the Largo family home in barangay Cantabaco, Toledo City.(CDN/Tonee Despojo)

A woman and her four-year-old nephew died while five others were injured after a 10-wheeler dump truck plowed through a house with a mini store in sitio Apid Acro, barangay Cantabaco, Toledo City at 12:40 p.m. yesterday.

Four-year-old James Kyle Selgas was unable to make it to the South General Hospital.

He and his 20-year-old aunt Messy Alisoso were pinned down by the 10-wheeler dump truck driven by 29-year-old Johnrey Sareta.

Sareta, a native of Cagayan de Oro City, sustained a fractured right leg after he jumped out of the vehicle before it crashed into the house and mini store 100 meters away.

Messy’s remains were recovered  from under the dump truck after more than three hours.

Alisoso’s two-year-old daughter Alisha Keith Alisoso survived the accident despite being thrown  from her hammock by the collision.

Other people who were injured include 70-year-old homeowner Raymonda Largo, her 40-year-old son Joven, her grandchild Levi Largo and Jake Alisoso.

The Largos and Jake Alisolo were confined at the South General Hospital in Naga City while Sareta was brought to a hospital in Cebu City.

Relatives said the family was watching TV when the accident occurred.

Sanchez said their investigation showed that Sareta’s dump truck with plate number JEW 108 came from Balamban town and was headed to Talisay City when it tried to traverse the downhill curve.

After the brakes failed, the truck fell to its side, destroying the house made of light materials.

Sanchez said Messy Alisoso was washing the dishes while looking after her daughter when the truck plowed through the house.

Sanchez said the area was not accident-prone. He said Sareta will be detained as soon as he is discharged from the hospital.

A team from the Carmen Copper Corp. arrived at the area after being called in by the Toledo City police. They used their boom truck to recover Messy’s remains as well as move the dump truck that later fell into a meter-high ravine.

Heavy traffic ensued at the national highway as the boom truck occupied a good portion of the road. The team took more than three hours to recover Messy’s remains and the truck. Traffic went back to normal at 5 p.m.

She and Messy’s mother Jocelyn were weeping when interviewed by the media.

“The truck owner never came to us. We do not know what to do. The South General Hospital is asking for a P50,000 down payment and we don’t have the money because we are poor,” Jocelyn said.