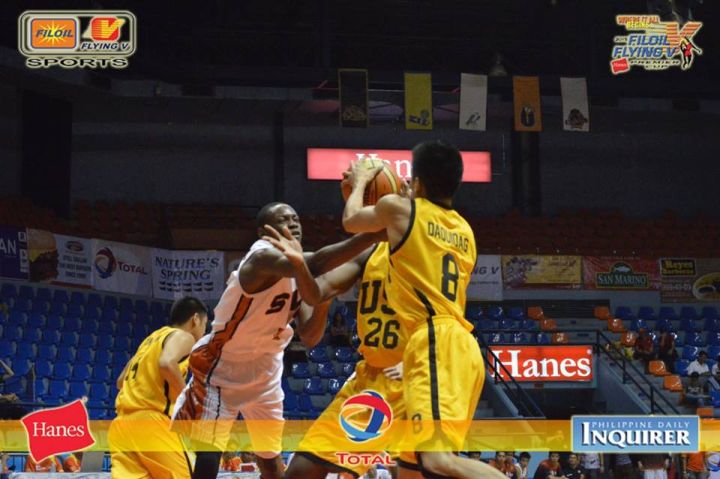 For the beleaguered Southwestern University (SWU) Cobras, another day meant another loss as they got beaten by the University of Santo Tomas (UST) Growling Tigers, 59-66, in the Filoil Flying V Hanes Premier Cup yesterday at the Arena in San Juan.

The loss was the Cebu champions’ third in a row and fifth in six games as they dropped out of contention for the next round.

Though they managed to briefly grab hold of the lead, 54-52, at the halfway mark of the final frame, wily UST guard Ed Daquioag did them in as he scored 12 of his 22 points in a huge 14-5 endgame run that netted the Growling Tigers their fourth victory in seven games.

Daquioag complimented his scoring binge with seven rebounds and six assists while Mario Bonleon provided UST with another weapon with a dominant inside performance of 14 points and 10 rebounds.

The game was close all throughout as the Cobras crawled their way back from a 13-19 first period deficit to tie the game at 37-all in the third canto after a jumper from Congolese Boko Mupungu.

But UST refused to be fazed and countered with layups from Bonleon, Daquioag and Kent Lao to surge ahead once more, 49-45, heading to the last period.

SWU took hold of the lead but Daquioag’s fiery fourth quarter scoring spree denied the Cobras of their second win in this prestigious preseason competition.

Daryl Goloran celebrated his birthday by getting a double-double of 16 points and 12 rebounds.

However, the squad sorely missed the production of two-time Cesafi MVP Mark Jayven Tallo, who tallied just eight on 3-of-13 shooting while Mupungu was limited to just six.

“The team is actually playing well. It’s just that we haven’t been able to close out those games,” he said.

The Cobras close out their stint on Saturday with a match versus the NAASCU champions, Centro Escolar University Scorpions.