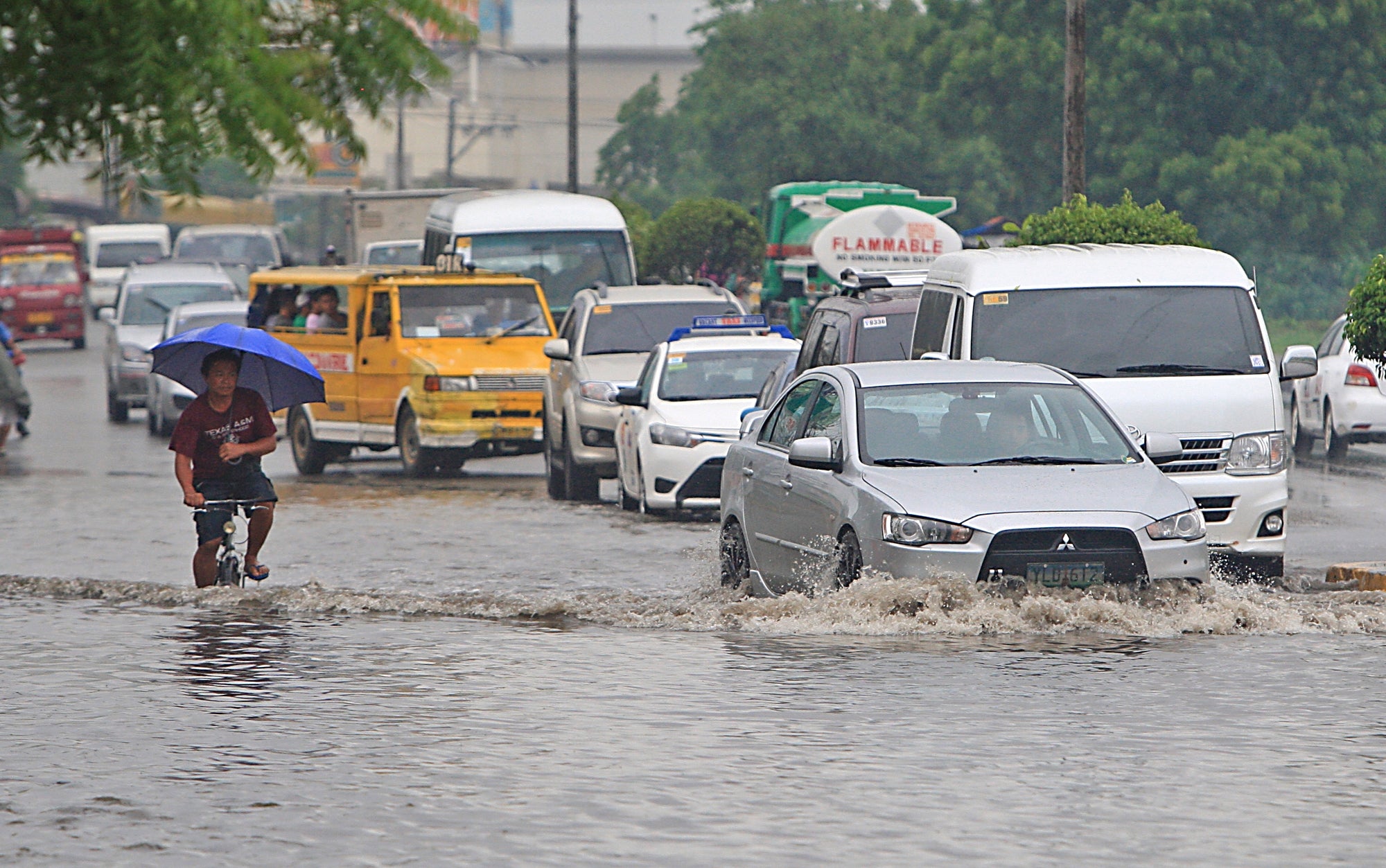 SAME OLD PROBLEM. Motorists were greeted with the familiar sight of floodwaters after a heavy downpour in Subangdaku, Mandaue City.(CDN/TONEE DESPOJO)

Less than one millimeter of rainfall was recorded in Metro Cebu as of 3 p.m. yesterday, the state weather bureau Pagasa said.

But the rains lasted for more than an hour, forcing Metro Cebu’s commuters and motorists to wade in ankle to knee-deep floodwaters for most of the day.

Traffic congestion was heavy in parts of the cities of Mandaue and Cebu due to floodwaters caused by the afternoon rain.

Pagasa officials expect the rain to continue until today due to the Inter-tropical Convergence Zone (ITCZ).

“We can’t say yet if the ITCZ can bring low pressure area (LPA) or typhoons,” he told Cebu Daily News.

The ITCZ is caused by winds coming from the northern and southern hemisphere that meet at the equator.

Quiblat said they’ve recorded 47 millimeters of rainfall so far in June, lower than the average 183.3 millimeters recorded for the month.

Pagasa earlier said the onset of the rainy season would be the last week of June due to the weak El Niño dry spell.

Despite the lower volume of rainfall, ankle to knee deep water slowed down traffic flow in downtown Cebu City for at least 20 minutes.

The Mahiga creek in barangay Mabolo started to overflow at noon. Personnel of the Cebu City Disaster Risk Reduction Management (CCDRRMC) were placed on standby to evacuate the settlers in case the water level goes up.

The Visayan Electric Co. (Veco) cut off power to the line at 2:30 p.m. and restored it after the tree branch was cut off.

“The floods were manageable. There were just a few areas that experienced flood only up to the ankle level. But it subsided right away,” Tumulak said.

Soil erosion was also reported outside the Busay Elementary School.

In Mandaue City, knee deep flooding was experienced at A. S. Fortuna Street and at the national highway in barangay Tipolo, slowing down traffic on the two roads.

The Traffic Enforcement Agency of Mandaue (TEAM) had to divert small vehicles passing by A. S. Fortuna Street to the parallel Cabancalan Road.

Suico said the drainage project there has yet to be completed.

Andres Suson of the City Engineering’s office said service utilities have yet to transfer their wirings to another place, delaying the project.

Suico said the Mahiga Creek on the Mandaue City side overflowed into Lopez Jaena Street.

Though the floodwaters subsided 40 minutes later, heavy traffic lasted for more than an hour due to the ongoing road concreting projects along Plaridel, A.S. Fortuna and M.L. Quezon streets.

Water rose on the highway along the public market in Carcar City.

He said the water rose to about six inches but it was still manageable to passenger jeepneys and even the trisikad.

Campugan also said the DPWH is also undertaking a road project nearby.
The nearby towns of San Fernando and Sibonga reported no flooding. /With Reporters Victor Anthony V. Silva and Jose Santino S. Bunachita and UP Cebu Intern Mary Claire U. Catado