Rama thanks Osmeña for SRP, council for authorizing lot sales 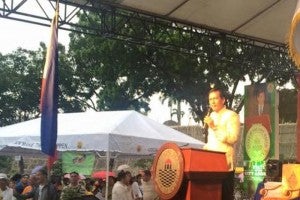 In his State of the City Address held at the Plaza Independencia, Rama thanked former mayor Tomas Osmeña for the SRP especially after two prime lots were already sold to private investors.

READ: ‘BEST GIFT TO THE CITY’

Rama reiterated that the sale was the “best gift” his administration can give to Cebu City residents.

With more than P1 billion paid as security bond bid by SM Holdings and Ayala Land Inc. for 26 hectares of land near the San Pedro Calungsod templete in the SRP plus more paid by Filinvest Land Inc. for two parcels of lots, Rama said
the city now has money to provide housing to displaced families who are considered vulnerable to disasters and to pay city’s debts.

He also announced bonuses for the City Hall employees and barangay officials, financial assistance to the senior citizens and persons with disabilities among others.

Rama also assured the settlers of Cebu provincial-owned lots 93-1 that their tenurial issues will be resolved with the help of Cebu Provincial Gov. Hilario Davide III. He said a new Cebu City Medical Center will rise.

Despite the rainy weather, Rama push through with his address under a tent at the Plaza Independencia, Saturday afternoon.

Cebu City councilors, City Hall employees and department heads, supporters, and family and friends attended the ceremony.  Rama didn’t forget to thank and recognize the Cebu City Council who authorized him to sell portions of SRP.

Rama immediately directed Collin Rosell, chief of the Department for the Welfare of the Urban Poor and Cebu City Councilor Alvin Dizon and son Mikel to focus on providing housing to “displaced families.”

“I cannot do it alone. The real wind are all of you. Private sector, my family, city hall employees, dept heada, NGOs, vice mayor Labella. We are not oblivious that there are more and more challenges that the city has to confront.” Rama said.

Rama said the CCMC will service the city’s indigent residents. “The poor man’s hospital. We will see to it that you dont have to pay a single centavo if you are poor,” he said.

On Tuesday, Cebu City Hall will distribute financial assistance to the persons with disabilities. The senior citizens will also receive P2,000 cash assistance on

Wednesday while City Hall’s employees will receive a month’s worth of their salary as bonus. Barangay officials can also expect the distribution of their bonuses on Thursday.

“This is symbolic that we will continue. All of us. Join us. Be on board on a contemporary vessel that will bring prosperity, progress, peace and that will bring us to a tomorrow of infinity preserving humanity,” the mayor said.

Among those who attended the address is celebrity talent manager Anabelle Rama, her husband Eddie Gutierrez and their celebrity son Richard. Also present is Catbalogan City Mayor Stephany Uy-Tan.