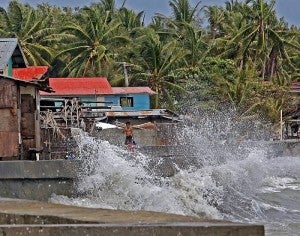 NO MOVING OUT. Settlers staying along a seawall in sitio Mahayahay, barangay Cansojong, Talisay City watch the waves crash near their homes as they remain determined to wait it out until the weather clears.(CDN/LITO TECSON)

THE Talisay City Disaster Risk Reduction and Management Office (CDRRMO) ordered all evacuees to go home after lunch yesterday following reports that the weather will clear by tomorrow.

Christopher Estrabon, CDRRMO head, said there are indications that there won’t be a storm surge due to heavy rains after the state weather bureau Pagasa reported that tropical storm “Egay” will leave the country on Wednesday.

He said 52 families were displaced since last Saturday noon until yesterday.

But only 12 or 37 persons from barangay Cansojong and four families or 20 persons in barangay Tanke stayed at the Talisay City Sports Complex and Tanke barangay hall.

About 84 families from the seven coastal barangays of Pooc, Biasong, Tanke, San Roque, Dumlog, Cansojong and Poblacion were affected by the huge waves that hit the coastline last Saturday and Sunday.

The Talisay City Social Welfare and Development Office earlier said there were 14 houses that were washed out and over 50 houses damaged by the big waves. Relief goods were given to the affected families.

Read Next
Heavy traffic in Cebu today for US envoys