Some families stay as waves sweep homes in Talisay 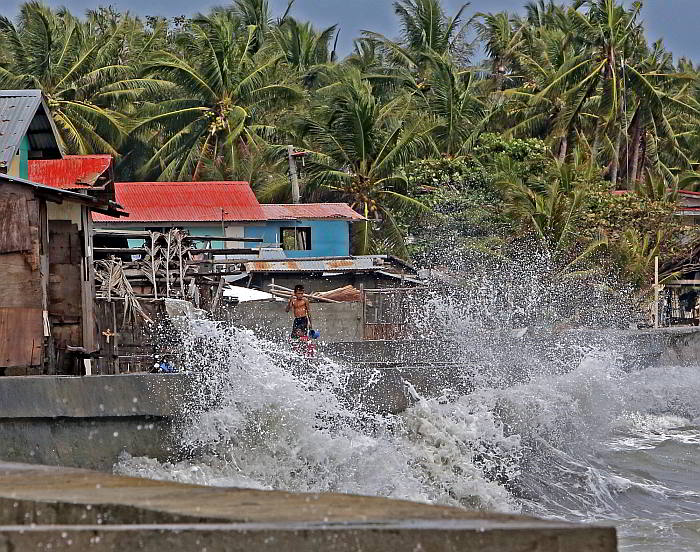 NO MOVING OUT. Settlers staying along a seawall in sitio Mahayahay, barangay Cansojong, Talisay City watch the waves crash near their homes as they remain determined to wait it out until the weather clears.(CDN/LITO TECSON)

More than 50 families of coastal barangays in Talisay City were evacuated after big waves washed out 14 houses and damaged over 50 homes last Saturday and yesterday.
The Talisay City Social Welfare and Development Office said 14 houses in barangay Cansojong were washed out while five homes in barangay Dumlog were damaged by huge waves caused by tropical storm “Egay.”

John Limquiaco, operations officer of the Talisay City Disaster Risk Reduction and Management Office (CDRRMO), told Cebu Daily News that the displaced families lived in the shanties near the seawall. No casualties were reported, he said.

He said they, along with barangay officials, social welfare personnel and the mayor’s staff, met with the residents last Saturday evening to persuade them to evacuate due to the big waves, but most of them refused.

“It’s okay. We will just stay here. We are used to this, and we don’t want our things to get stolen when we leave for the evacuation center. We just want the city to send us food here,” said Romanita Alesna, one of the residents in barangay Cansojong whose home was damaged by the big waves.

Other families only decided to move out after they were awakened by the seawater flooding their houses early Sunday morning.

They said the flooding was so sudden they were unable to secure their belongings.

They said they only had enough time to get out of their houses before these were washed out by the waves.

Last Saturday, three families in barangay Tanke were evacuated to the Tangke barangay hall due to big waves.
Barangay Poblacion had the most number of damaged houses at 55.

Food packs and water were provided to the affected families who were later transferred to the Talisay City Sports Center.

A truck is also on standby to pick up other residents in coastal areas who needed to be evacuated as Talisay City continued to experience strong winds and huge waves yesterday.

“All they have to do is to inform their barangay officials or our disaster response and management teams on patrol to pick them up and our trucks will be there for them. They will be evacuated to designated evacuation centers where food and water is readily available for them,” Delos Reyes said in a phone interview.

Delos Reyes said financial assistance will be given to the affected families so they can rebuild their homes.

Limquiaco also said officials of barangay Cansojong brought a sack of rice to each of the families in their area.

Christopher Estrabon of the CDRRMO said they are asking all residents at the seaside and seawall to evacuate rather than be swept by the waves.

Read Next
Foreigner in PH tests positive for MERS