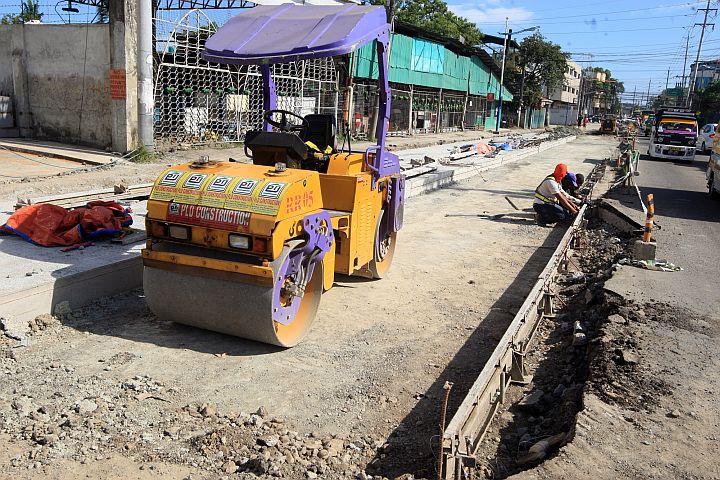 Workers of PLD Construction lay the foundation for the concretization of Plaridel St. in Mandaue City. The project is targeted to be completed before Ironman 70.3 on Aug. 2. (CDN PHOTO/TONEE DESPOJO)

COA: Let city accountant sign contracts, or these are void

Cebu City government contracts for over P420-million worth of infrastructure projects lacked the signature of the city accountant and were, thus, considered “legally impaired,” state auditors said.

City officials said they defended the contracts during the exit conference with the Commission on Audit (COA) regional office last February, citing the Local Government Code which provides that the accountant’s signature is not necessary.

State auditors, however, insisted in its report on the Cebu City government’s 2014 operations that the city accountant is required to sign all infrastructure contracts as witness.

Otherwise, “the contracts are void,” the report said. Under government auditing rules, void contracts would be disallowed in audit.

The report didn’t include an answer from City Hall, unlike in other observations.

He said they plan to file a consolidated answer to the state auditors’ observations.

Salomon said it has been City Hall’s practice that the city accountant no longer signs project contracts if the city treasurer signs them.

He said the Local Government Code, or Republic Act (RA) 7160, gives the city treasurer the mandate to certify the availability of funds.

“The purpose for the accountant to sign is to certify the availability of funds.

But pursuant to RA 7160, the person mandated to certify (availability of) funds is the city treasurer.

There’s no need for me to sign as witness. It’s redundant already,” said Salomon, who is also a lawyer.

He said the city treasurer issues a Certificate of Availability of Funds (CAF) prior to project implementation.
Salomon said he has read jurisprudence supporting his explanation.

EXIT CONFERENCE
He said he gave this answer to the COA during the exit conference on Feb. 27 this year, but it might not have been considered in the report due to time constraints.

City Engineer Jose Marie Poblete said some of the 56 projects affected by this COA observation  have been paid for by the city government.

He couldn’t recall the specific projects.

These infrastructure projects are not just the ones in 2014,” Poblete said.

“Infrastructure contracts entered into without the signature of the City Accountant as witness is legally impaired and thus, of doubtful validity,” the report said.

The report said Section 1 of Letter of Instruction (LOI) No. 968, issued on Dec. 17, 1979, provides that all contracts for capital projects be signed by the chief accountant as witness. Without the signature, the contracts shall be considered “null and void.”

The report also cited Section 86 of P.D. 1445, or the Government Auditing Code, which provides that no contracts involving public funds be entered into unless the proper accounting official will certify that funds are available and have been appropriated for the purpose.

“Based on the foregoing, the important role of the accountant in the validity of any government contract cannot just be set aside.

Under the rules, void contracts shall be disallowed in audit,” COA said in its report.

‘FAST TRACK’
In the same report, COA recommended that City Hall fast track the implementation of suspended and ongoing projects.

The commission also recommended that the Local Development Council strictly monitor and evaluate the implementation of the projects so problems can be addressed immediately.

The report pointed out that only about half of 93 infrastructure projects with approved budgets amounting to P629.4 million have been implemented by the city government.

Only 48 projects totaling P228.6 million have been implemented.

The report said 16 projects, worth P64.6 million, were suspended while 28 projects amounting to P332.6 million are ongoing and one project worth P3.5 million was terminated.

Of the ongoing projects, COA said seven have gone  beyond their target completion date.

Two of the unfinished projects, both road concreting with drainage, were even granted extensions.

“The delay in the implementation of these projects undermine and deprive the targeted beneficiaries of its benefits that can be derived therefrom and defeated the purpose for which these were programmed and appropriated,” COA said.

‘UNIMPLEMENTED’
The COA report also noted that P550.4-million worth of development projects under the Annual Investment Plan (AIP) for 2014 have remained unimplemented, mostly for lack of specific plans and program of works.

State auditors recommended that City Hall facilitate the implementation of these projects, which are funded from 20 percent of the annual internal revenue allotment.
Of the AIP projects that were not implemented, P212.3-million worth of projects were for social development, P212.3 million for economic development and P125.7 million for environmental management.

COA said there was no proper coordination among the Bids and Awards Committee, Department of Engineering and Public Works (DEPW) and the City Council on the implementation of the projects.

As a strategy, City Hall focused on implementing in the early part of 2014 those projects programmed in previous years.

State auditors, however, said they were referring only to current appropriated projects chargeable against the 2014 AIP funds.

Mayor Michael Rama earlier said he has instructed City Administrator Lucelle Mercado to sit down with the various departments concerned and submit a  reply to the observations made by the COA in its AAR.