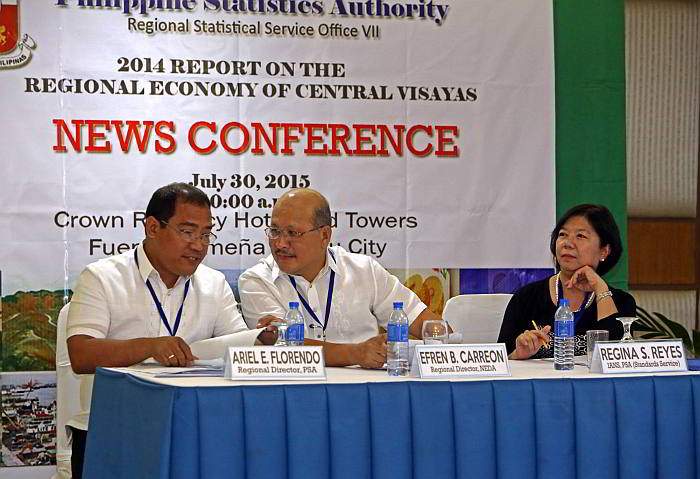 The Philippine economy slowed down last year, with the gross domestic product (GDP) expanding by only 6.1 percent from 7.1 percent in 2013.

Central Visayas ranked 3rd among the 17 regions, next to Davao Region (9.4 percent) and Central Luzon (9 percent).

Florendo clarified that while Davao grew at a faster pace, Central Visayas made the larger contribution to the national economy.

He was confident of meeting this year’s growth target of 9.7 percent to 11.9 percent for the region, citing the competitiveness awards received recently by Cebu province, Cebu City and Jagna town in Bohol.

“These clearly indicate that business and consumer confidence in the economy is still very high, and support our optimism in hitting our growth targets for 2015,” he said.

Tourism is expected to get a boost with the holding of a series of high-level Asia-Pacific Economic Cooperation (APEC) meetings from August to September as well as the preparations for the International Eucharistic Congress in 2016.

Both will be held in Cebu, the biggest contributor to the gross regional domestic product (GRDP) of Central Visayas.

GRDP, the total value of goods and services produced in a region, is used in making policy and business decisions. It is also one of the indicators considered for wage adjustments.

The services sector contributed the biggest share of 54.6 percent to the GRDP, followed by the industry sector with 39.4 percent and agriculture, hunting, forestry and fishing (AHFF) with 6 percent.

Industry’s faster pace was attributed mainly to the surge in construction activities, which grew by 24.7 percent in 2014 from 2.2 percent the previous year.