Jenalyn Soon (left) explains in the office of Sr. Supt. Armando Radoc of the Lapu-Lapu police, how she knew her live-in partner Ruben Fernandez had a hand in the murder of 17-year-old student Karen Kaye Montebon, a family friend. (CDN PHOTO/ JUNJIE MENDOZA)

Parents of Karen Kaye Montebon yesterday thanked the police for solving the murder of their 17-year-old daughter but said their “sorrow won’t go away”.

The victim’s mother, Emelinda, was emotional when she faced the suspected killer’s 23-year-lover Jenalyn Soon, a closer family friend, at the Lapu-Lapu city police office.

Her trust betrayed, the victim’s mother lashed at the young woman, who had visited the Montebon’s house while Karen was home alone in the morning of Sept. 15,  a Tuesday that ended with Karen being choked to death by Soon’s shabu-sniffing 23-year-old  boyfriend, Ruben Fernandez, who stole the college student’s DSLR camera, iPad, a portable play station and small jewelry.

(You thick-faced, no-good animals.  Your life is not enough to pay for the loss of my child.)

The parents had been called in to identify each stolen item laid on a table for viewing.

All missing items, except for the iPad, were recovered. 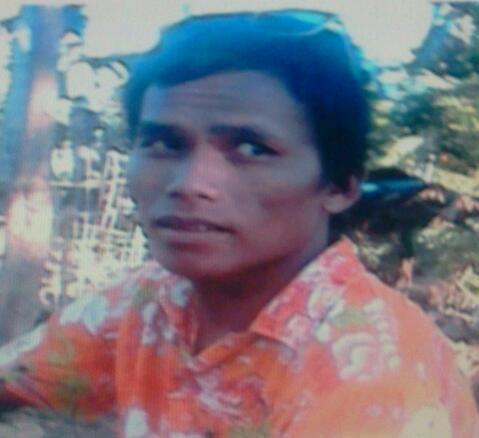 Senior Supt. Armando Radoc, Lapu-Lapu police chief, said Fernandez,  who was shot dead on Tuesday by an unidentified assailant while trying to hide in an islet of Getafe, Bohol, was “not a fall guy”.

Radoc said he was “100 percent sure” the slain man was the lone killer.

With this, no charges need to be filed said the police chief.   He said the girlfriend, Soon, was a “witness” and had no participation in the crime.

Karen’s mother said the family was satisifed with the police inquiry.

“Nagpasalamat mi nga nakab-ot na namo ang hustisya but dili na man mabalik ang kinabuhi ni Karen mao nga dili pa gyud mawala ang among kagu-ol.  (We are thankful that we have attained justice but this will not bring Karen back to life.  Our sorrow won’t go  away.)” she said.

After her affidavit is notarized before a prosecutor, she will be released on Wednesday, said Radoc.

Answering speculation, Radoc said  Soon could  not receive the P500,000 cash reward offered by Mayor Paz Radaza for vital information leading to the killer, even if she’s a witness.

He said no one was qualified to receive the reward money.

Radoc said he already talked to Mayor Radaza and suggested that instead of a reward, an ‘allowance’ could be given to parties who helped trace the whereabouts of the supsected killer.

Under interrogation, Soon was first hesitant to tell police where to find her boyfriend for fear he would be harmed.

Sr. Supt. Radoc said he blew his top and reprimanded her that she could be held liable for withholding vital information.

Soon, when asked about possible places her boyfriend could be found,  mentioned several sites — Cordova, Nasingin island in  Bohol, and Siquijor where Fernandez  has siblings. Policemen in two motorized bancas were immediately sent to Nasingin Island.

Police yesterday presented two other witnesses – the man who pawned Karen’s camera, and the owner of the motorcycle used by Fernandez.

The motorcycle was actually stolen from the husband of Fernandez’s cousin. Fernandez took the bike when he fled after losing a cockfight and had no money to pay the winner.

RUBEN Fernandez, a former inmate, was released from the Lapu-Lapu city jail for theft and robbery last September 2014.  He had been jailed twice before.

When he showed up outside Karen Kaye Montebon’s house about 7 a.m. with his girlfriend, it was  his first time to step into the residence, a row house unit in Corinthian Subidivison, Lapu-Lapu City.

Karen, noticing him park his motorbike outside, asked him to come in.

Jenalyn Soon said she dropped by to check if her sister in Hawaii, Rosalyn, had sent money through Karen’s mother.

The money transfer was a long-standing arrangement arising from the friendship between Karen’s mother Emelinda Montebon and Rosalyn which began when they were neighbors in barangay Gunob in 2009.

During fiestas, Christamas, or family emergencies,  Rosalyn would send money  for her family in Olango Ilsand through Karen’s mother, who was a worker in the local church, the Mactan Cathedral of Peace.   They trusted each other.

The conversation with Karen was brief, said Soon.

Karen simply told her she had no idea about funds arriving since her mother wasn’t around.

The couple then left the house, where Karen was alone. Both of Karen’s parents and an elder sister had stepped out earlier at 6 a.m. for work and school.

Soon said they logged in with the security guard and had their names recorded.

Then the camera recorded Fernandez returning alone on the motorbike at 7:45 a.m. He left at  8:15 a.m.

The death of Karen Kaye, a petite Accountancy freshman in the University of San Carlos, triggered a social media storm when her strangled body was found  in her bedroom by her father who returned home at 5 p.m.

There was initial suspicion of rape, but an autopsy report did not yield conclusive evidence after an “abrasion” was noted in her privates.   The girl was fully clothed in shorts and a shirt.

For a week, police were under public pressure but had no firm leads other than a description of a man and a young woman on a motorbike seen arriving and leaving the house.

The breakthrough came on Monday with a call to the police station from Soon’s sister in Hawaii, where she confided to Sr. Supt. Radoc, Lapu-Lapu police chief, that Soon had important information on the case.

Police went to Soon’s home in barangay San Vicente, Olango Island to pick her up.

Under interrogation, Soon identified her boyfriend as having likely been responsible for the murder.

Soon and her live-in parnter had been together for four years.

San Vicente barangay captain  Cyrus Eyas said Fernandez was a boatman and his former errand boy who was involved in theftr cases.

Eyas said the suspect was sent to jail for stealing P100,000 jewelry from a neighbor  and that his reputation was known in the neighborhood.

(Asked yesterday by reporters, Soon said she “no longer felt love for Ruben” after learning that he had killed Karen.)

How did she find out what he did?

Soon said that right after they left Corinthian Subdivision on Sept. 15,  her boyfriend dropped her at sitio Mahayahay, barangay Bangkal, saying the motorbike was low on fuel and had to look for a gas station.

He didn’t come back for several hours.   Soon said she walked instead to barngay Marigondon where she met Ruben’s friend Rabie Flores and wife Geraldine.  At 1 p.m. Fernandez came by with a sling bag of gadgets.

Fernandez took the DSLR camera and had Rabie pawn it. It was pawned for P7,000 at a shop but Rabie told his friend the amount was P5,000.

According to Soon, the two men then went out and bought shabu with it.

Soon said she joined them in sniffing the shabu.  She said the three of them spent the rest of the afternoon playing the card game “Tong-its”

By Wednesday, Fernandez had gone away without notice.

Soon said she went home to Olango Island and learned about Karen’s death the next day.

“Nagduda nako nga basin og dunay kalabutan si Ruben kay diha baya gyud anang adlawa nga namatay siya,” she said. (I started to have doubts that Ruben was involved because we were there in the house that day).

Soon said she was bothered by her conscience  for days until she called her sister in Hawaii on Monday morning to share what she knew.

Police recovered the DSLR camera in a pawnshop Lapu-Lapu.

In Nasingin islet, where police took two pump boats to track him down, they found the bullet-ridden body of Fernandez  about 300 meters from the shore near a footbridge on Tuesday afternoon.

They recovered Karen’s necklace, earrings, portable play station  (PSP) and a pair of slippers of Karen’s father,  in the house of Fernandez’s sister in the island.

Fernandez’s own yellow and green slippers were  left behind in Karen’s house in Lapu-Lapu City.