As the 9th APEC Transportation Ministerial Meeting (TMM9) winds down,   several delegates said they would  return to Cebu with friends in the not too distant future.

“The culture here and the people are lovely. I would love to come back and bring friends and family for a visit,” said  Nicholas Brown of  New Zealand during yesterday’s tour of Lapu-Lapu City and Cebu City.

He said he found  delicacies offered during the tour delicious, including the sticky rice bibingka, suman and biko served on board  their vehicle 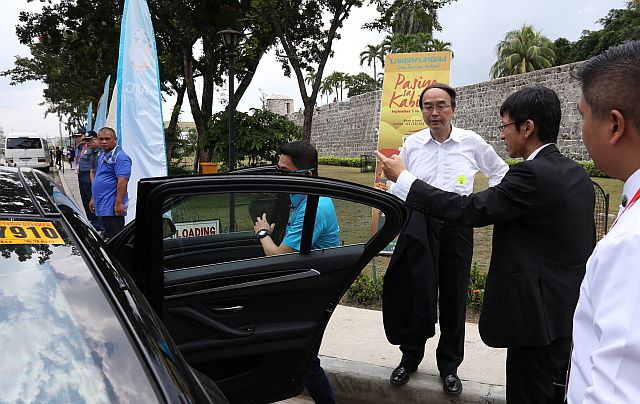 The complimentary  day tour brought them to heritage sites and landmarks on board three buses and six coasters.

When interviewed by Cebu Daily News during the tour,  delegates were gracious in their compliments.

They visited the  Magellan’s Cross where cultural dancers reenacted the arrival of Ferdinand Magellan in 1521 ,  the planting of the wooden cross, and how   Queen Juana, wife of Raja Humabon, received as a gift the image of the  Sto. Niño upon her conversion to Christianity.

Delegates  were given the option of riding  the tartanilla  (horse-drawn carriages) to the  Basilica Minore del Sto. Niño.

They were also taken to Fort San Pedro, where another group of dancers presented the Sinulog dance.

Tour guides pointed out historical sites along the way, such as Colon Street as  the oldest street in the Philippines, and  landmarks like the Fuente Osmeña Circle, the University Belt, Salinas Drive Food Strip, South Road Properties, I.T. Business Park and the Cebu Business Park.

For the last stop, delegates were taken to the Liberty Shrine in Lapu-Lapu city  where another dance reenactment took place, this time of the Battle of Mactan.

Regional Director Rowena Montecillo of the Department of Tourism said yesterday’s tour was similar to the one offered during the previous APEC meetings in Cebu.

“However, we changed some areas, like Parian. We could not go there because of the road problem,”

Montecillo said the TMM9 is different because nobody went out during the meetings.

“They didn’t have any free time because they were promised that there was going to be one big free tour for all of them,” she said.

Several members of the Vietnam delegation  said that they found the city scenes, food, attractions and people wonderful.

Alice Queblatin, chairperson for the Cebu APEC Tourism Consortium, was happy with the positive feedback.

“Most  of the delegates expressed high interest in coming back. Cebu is not just for business, which is what they came here for, but also for leisure,” she said.

In assessing the tours, Queblatin said several things  need to be improved if Cebu wants to maintain its position as a desirable global destination.

Cracked road must be fised. Infrastructure  should be improved, she said.

Traffic wasn’t heavy during the Saturday tour, which lasted a little over two hours.

“We didn’t close any roads. Instead we just prioritized the delegates when they were already  on the road. We let them pass first,” Tumulak said.